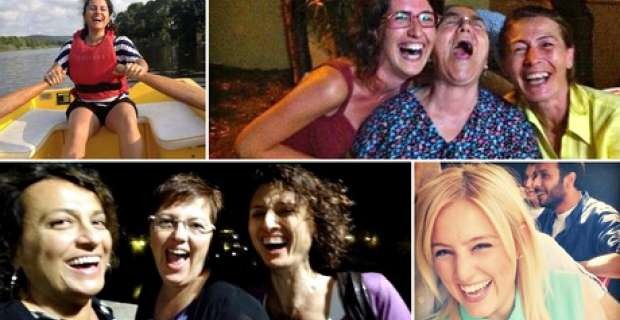 Bülent Arinç said women should not laugh in public, prompting backlash and highlighting state of women’s rights in Turkey

Twitter in Turkey broke into a collective grin on Wednesday as hundreds of women posted pictures of themselves laughing.

They weren’t just happy. They were smiling in defiance of the deputy prime minister, Bülent Arinç, who in a speech to mark Eid al-Fitr on Monday said women should not laugh in public.

“Chastity is so important. It’s not just a word, it’s an ornament [for women],” Arinç told a crowd celebrating the end of Ramadan in the city of Bursa in an address that decried “moral corruption” in Turkey. “A woman should be chaste. She should know the difference between public and private. She should not laugh in public.”

On Wednesday thousands of women posted pictures of themselves laughing out loud, with the hashtags #direnkahkaha (resist laughter) and #direnkadin (resist woman) trending on Twitter.

Turkish men also took to social media to express their solidarity. “The men of a country in which women are not allowed to laugh are cowards”, tweeted one user.

Other opposition figures pointed out that Arinç’s comments highlighted the dismal state of women’s rights in Turkey. Calling on people to protest against massive violence towards women at a demonstration next week, Melda Onur, an Istanbul MP for the main opposition Republican People’s party, wrote on Twitter: “We would have left Arinç to his fantasies and wouldn’t even have laughed about it, but while so many murders are being committed he makes [women] a target by stressing the need for chastity.”

A 2009 report commissioned by the Prime Ministry Directorate on the Status of Women found that more than 40% of Turkey’s female population have suffered domestic violence. More than 120 have been killed since the beginning of this year alone, mostly by their partners or other family members.

Mehtap Dogan of the Socialist Feminist Collective – who was among the women who posted pictures of herself laughing – said that Arinç’s statements were not an isolated incident of misogyny.

“His words perfectly illustrate his and the [ruling] AK party’s attitude towards women,” she said. “In their eyes, women should not have any rights, they treat us like a separate species.”

It was certainly not the first time the government of Erdogan – infamous for his admission that he did not believe in equality between men and women – has provoked outrage with discriminatory remarks.

Dogan added: “Using moralism to hide behind, they defend violence, rape, and sexism.”

In 2012, when the government tried to massively curb the right to abortion, Ankara mayor Melih Gökcek said on public television: “Why should the child die if the mother is raped? The mother should die instead.”

When women in an Anatolian town approached the visiting forestry minister in 2009, asking for work, he replied: “Isn’t your housework enough?”

Asked by journalists to comment on the social media backlash, Arinç said his comment had been taken “out of context”.

“From one and a half hours of my speech, some only heard what I said about women laughing in the street. What a disgusting, ugly and unfounded fabrication.”

But he also said “I stand by my words”, in reference to his wider speech, which he described as an effort to shine a light on the “degeneration in society”. In an attempt to distance himself from his earlier statement, he said someone who would want to ban women from laughing in public “would have to be an idiot”.

He also accused “certain stars” of “fake laughter”: “These are all artificial laughs. In reality laughter brings relief and makes people happy. I think we are in need of that everywhere, but your laughs are fake. You all had your moments of fame, but when that eluded you tried to attract attention with alcohol and such fake laughter.”

Arinç went on to slam women who “despite being married with kids go on vacation with their boyfriends” and those who “never miss the chance to wrap themselves around a dancing pole”.

Turkish media has speculated that the latter comment was directed at Asena Erkin, wife of the Turkish Fenerbahçe footballer Caner Erkin, who had recently shared an Instagram picture of herself dancing around a pole with the comment: “When I see a dancing pole, I never miss the chance [to use it].”

But for Mehtap Dogan, Bülent Arinç’s statements this week were not simply a laughing matter: “The AKP government denies women their rights. They are sexist. We were not surprised by what was said this week, but we are really angry.”