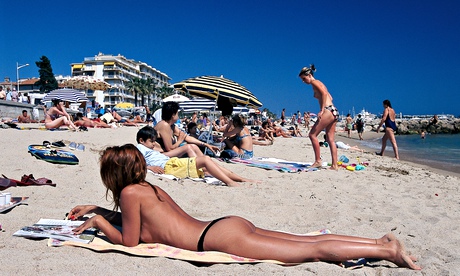 Covered up or exposed, the female body continues to provoke debate. We discuss how women negotiate a political minefield

Agnès Poirier, French political and film journalist After shocking the world in the 1970s by baring their breasts on the beach, French women are said to be covering up. Au revoir topless sunbathing, says Elle magazine, lamenting this new trend. The culprits: fear of skin cancer and indiscreet boob pictures posted on social networks. So is this a step back for women, as some feminists recently suggested? I don’t think so. The end of topless sunbathing is not a step back because it was never a step forward in the first place. Baring le haut, as we say in French, never was a feminist act, rather a vain and narcissistic quest for a body without tanning lines. Feminists, or women of action, enjoy the beach to play, run, swim, and read. Topless sunbathing, or the art of avoiding tanning lines, requires an incredibly sophisticated and vacuous routine which basically prevents action. You must roll like a pancake on your towel and expose the skin at different angles and at regular intervals. It was always a fashion, that of the femme-objet, not in any way the manifesto for the femme libérée. I say: good riddance!

Zoe Margolis, writer and feminist campaigner I am inclined to agree with you that topless sunbathing is not, inherently, a feminist act, in the same way that baring one’s ankles is not necessarily a political decision. But these choices do not take place in a vacuum. Historically, men have sought to control female bodies – and female sexuality – and the conflation of women’s flesh with being bad, sinful and so on continues to this day, so what women choose to do with their bodies in public has to be seen within that context; the personal is indeed the political. The French feminist group Les TumulTueuses have taken direct action themselves, baring their breasts at swimming pools to highlight society’s sexist double standard about female bodies. If women are no longer going topless, I think it has less to do with narcissism and vanity and is more about the impact of body-shaming and a sexist culture which is explicitly critical of female bodies. We need more, rather than less, nudity, I say!

AP More female nudity in order to desexualise it: I see your point entirely. Last week, visiting my local public swimming pool in central London, I was shocked to see girls aged between six and 10 dressed in burqinis, covered in black, from ankle to neck, while their brothers were just wearing skimpy swimming shorts. The female body is a political minefield and a battleground for misogynists of all creeds and beliefs. The Nordic culture of nudism partly answers feminist pleas for treating the female body as a body like any other, a functional machine, rather than a sinful object of dark desires. Nudity leads to an acceptance of all our differences, to gender equality, but nudism has remained utopian as a movement and is constrained by law. However, all this goes far beyond the question of French topless sunbathing fashion!

ZM I agree with you that the female body is a political minefield. Given this, can we really separate the issue of topless sunbathing and write it off as just a “fashion”?

AP A very good point. Well, let’s say, it’s just as integral as self-tanning is to some English women.

ZM Well, that’s not to say that vanity and appearance aren’t a priority for some, and we’ve disagreed about why that might be, but perhaps we need to appreciate the origins of topless sunbathing to better understand the rejection of it now. Arguably, it was, in post-1968 French society, a symbol of the feminist struggle in France – though I know we differ in our opinions of this. But surely you’d agree, Agnès, that the topic then, as now, provided a bit of a battleground for feminists and polite society, alike? And that this highlights that it’s not just about a sartorial or “fashion” choice, but about the bigger picture: how women present themselves in public.

AP I do agree, Zoe! How women present themselves in public: another war zone. And a question of generation. For instance, Simone de Beauvoir, a pre-1968 feminist extraordinaire, was incredibly feminine, loved fashion; she could look austere or glamorous, according to her mood and the circumstances. Not in the style at all of 1970s bra-less, makeup-free feminists.

ZM To come back to your earlier point, of women choosing to cover up for fear of images of their bodies being shared via social media, perhaps we should be looking at the culture itself, rather than on individual choices women make. If men comment upon, objectify and take photographs of women’s bodies without their consent like those awful “voyeur” or “upskirt” websites (and similar, professionally shot photographs which the tabloid press frequently publish), then we need to question that entitlement, and the sexist socialisation of men, rather than women’s behaviour.

AP Which brings us back to the education of little boys and little girls! We can of course legislate and we certainly must adapt our existing legal arsenal to the new forms of unbridled machismo reigning on social networks, but we must go back to basics, too. It seems to me that the hypersexualisation of girls from a very early age, through shameless marketing, should be tackled much more vigorously by both society and legislators. Last year, France banned beauty pageants for girls under the age of 16 – a very good thing in my view. Feminists and the liberal left should also be much more vocal confronting the inherent misogyny of religions, especially in Britain where religion is considered a cultural matter that one should not question too much. You say more nudity on the beaches; I say let’s start first with confronting the idea that a woman should be attired modestly or cover her hair for fear of divine wrath.

ZM I absolutely agree that we need radical change in how boys and girls are educated and socialised, and obviously there is a lot of work still to be done in this area. Groups such as Let Toys Be Toys campaign against the gendering of children’s toys and books, and we are seeing a lot of progress there. I, of course, support your view that we need to oppose misogyny in every form, including within religion, but I think focusing solely on the latter is something of a scapegoat. In society as a whole there is a preoccupation with women’s bodies, their clothing – or lack of – and how they present themselves in public, and it is this that we need to battle. The constant focus by the media on women’s image contributes to the misogyny; just look at how the female MPs in the recent British government reshuffle were portrayed. How women look, or what they wear, should be unimportant – indeed, you and I should not even be discussing it! – but given society’s sexist double standards and unchallenged misogyny, I fear this debate will continue for some time.

AP And to celebrate the – one day, soon, I hope – end of misogyny, I’ll happily bare my breasts like in Delacroix’s painting, Liberty Leading the People!

ZM That day can’t come soon enough. I’ll be there, sans bikini top, on the frontline with you. Vive la révolution!