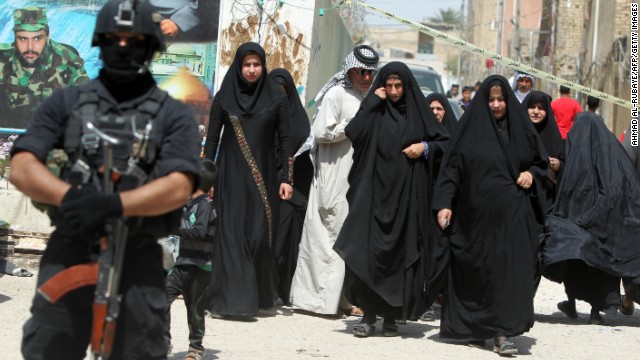 The Association of Middle East Womens Studies (AMEWS) would like to express its solidarity with the people of Iraq who have suffered from dictatorship, economic sanctions, an invasion and occupation, years of militarization, and a new authoritarian government. The most recent violence is caused by Islamic State (IS) forces and is especially harmful to religious minorities, though the far-reaching consequences to majority Iraqis should not be overlooked.Iraqi Christians have been systematically targeted by Islamist extremists since 2003, but the attack by IS is unprecedented and has meant that most Christians felt forced to flee their homes and seek refuge in the Kurdistan regional government (KRG) -controlled area. Yezidis have been protected in recent years by the KRG and its peshmerga forces, but their retreat before IS leaves the Yezidis exposed to forced conversion or death, and their sacred shrines subject to certain destruction.The Yezidi religion is an offshoot of ancient Iranian beliefs, with later Islamic and Christian influences. Once widespread across the region, Yezidis now flourish only in Sinjar and Sheikhan where their holiest site of Lalesh is located. Yezidis have long lived in harmony with their neighbours, but for the IS they are not People of the Book. Given our remit as the Association of Middle East Womens Studies, we are particularly concerned about reports of rapes, forced marriages and forced captivity of several hundred Yezidi women by the IS. Given the extremist track records of the IS and other Islamist groups, both Sunni and Shia, we know that women suffer in gender-specific ways from their control: strict regulation of mobility and clothing often go side by side with forced marriages, forced prostitution and gender-based violence.While Iraq’s minority populations currently bear the brunt of the IS’ violence and oppression, we are also alarmed by the potential impact of an extremist reordering of gender roles on Iraqi society. Men as well as women have been conscripted into the new IS social order, narrowing opportunities for communication and dialogue between different groups. We believe that the forced displacement, rape, kidnapping and killing of women and men from minority groups is devastating for Iraq’s future inclusiveness and stability.We call on the UN, on the US government, all policymakers, and on all concerned NGOs, to take all possible measures to assure the survival of the Yezidi and Christian communities in their ancient homelands, and to channel all possible humanitarian aid to the KRG and relevant NGOs. We call on the Iraqi politicians to establish unity government to protect religious and ethnic minorities as well as women, who are particularly vulnerable to the invasion by IS.Nadje Al-Ali,Professor of Gender Studies Co-Chair, Centre for Gender Studies  President, SOAS UCU, SOAS, University of London Thornhaugh Street, Russell Square London WC1H 0XG, UK Tel. (44) (0) 207-898 4547 http://www.soas.ac.uk/genderstudies/ andDr. Anita F sAssociate ProfessorDepartment of International Development, Community &  Environment (IDCE)Clark University, USA.afabos@clarku.edu