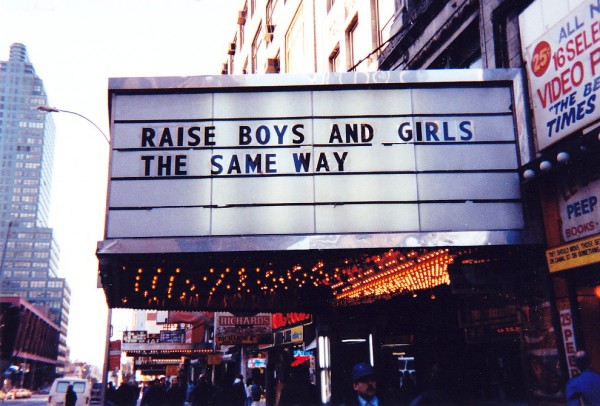 Radical statements in large fonts projected on buildings all over the world. This is Jenny Holzer’s work. And it just can’t go unnoticed.

American artist Jenny Holzer is one of the most well known contemporary artists of our time. Her work has appeared in public spaces all around the world. She experiments with language, carefuly selects the right words and forms the text that she will project. Much is poetry. The rest is just words. Her first appearance was in 1982, when some of her works flashed on a billboard in Times Square. Her first projection happened in 1996 in Florence, with the message ‘You are my own’ and ‘I am losing time’. Since then, her work has been in more than 40 places around the world.

Different place, different message, but always in the same context.

‘There is blood and more blood’ in Paris. ‘Secret proceedings’ in Washington. ‘Action causes more trouble than thought’ in San Diego. All her messages have political meaning. She speaks about feminism, sexuality, and power.

All her projections are in a similar minimalistic style: buildings covered by large white letters, distorted in a peculiar beautiful way. It is quite an interactive process for the people facing Jane Holzer’s work; it is like participating in a dialogue.

Sometimes her work can be provocative. But I think that’s the whole point. “Expressing anger is necessary” she said through her Tweeter account. And it is true. We need to be angry, and we need to express it. But we need to find the right way to do that. And it seems that Jenny Holzer has achieved that.