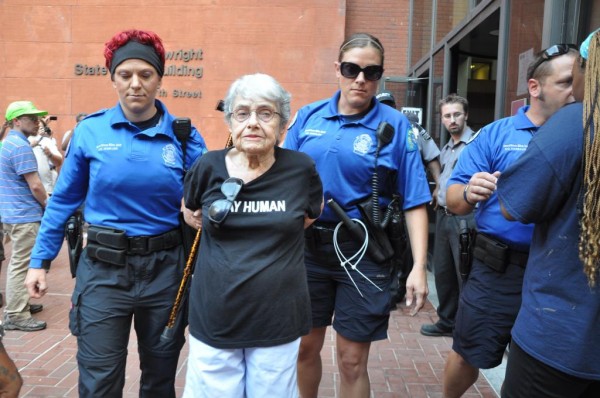 Hedy Epstein turned 90 on August 15, and she spent much of last week celebrating. Friends and family traveled to her home in St. Louis, Missouri, to join in the festivities—so many of them, in fact, that it wasn’t until yesterday that she finally had a day to herself. Epstein left her home in the afternoon, accidentally leaving her cell phone behind. By around 4:30pm, she’d been arrested.

A human rights activist and Holocaust survivor, Epstein had been following the unrest in nearby Ferguson, where an unarmed black teenager, Michael Brown, was shot and killed by police on August 9. Ever since, tensions have escalated. Protesters have taken to the streets for nine consecutive nights. Reporters have been arrested and threatened. There have been scattered reports of gunshots, looting and fires, plus countless photos and videos showing an over-militarized police force firing rubber bullets and tear gas into the crowds.

On Monday, Epstein decided to do something about it.

She knew about a gathering in downtown St. Louis to protest Missouri Governor Jay Nixon’s decision to activate the National Guard. As she and her fellow protesters peacefully marched towards the Wainwright Building, where Nixon keeps an office, they chanted “Hey, hey! Ho, ho! National Guard has got to go!” and “Hands up! Don’t shoot!” according to The Nation. Some people gave speeches. Others held signs. Epstein says she and her fellow protesters aimed to walk into Nixon’s office and formally ask him to de-escalate the situation in Ferguson. But police and security officers blocked the door, preventing them from entering.

“I really didn’t think about being arrested or doing anything like that,” Epstein told Newsweek. “I was just going to be somebody in the crowd. I guess maybe I was impulsive: Someone said, ‘Who is willing to be arrested if that happens?’ I said, ‘Yeah, I’m willing.’”

A police officer informed the crowd that Nixon and his staff were not in the building, Epstein says, and urged them to leave. When she and eight other protesters refused, they were arrested for failure to disperse. Police handcuffed Epstein behind her back and took her to a nearby police substation. She was booked, given a court date of October 21, and then told she could leave.

“I’m deeply, deeply troubled by what’s going on in Ferguson,” says Epstein. “It’s a matter of racism and injustice, and it’s not only in Ferguson…. Racism is alive and well in the United States. The power structure looks at anyone who’s different as the other, as less worthy, and so you treat the other as someone who is less human and who needs to be controlled and who is not trusted.”

Born in Freiburg, Germany, in 1924, she was just eight years old when Adolf Hitler rose to power. Her father ran a dry-goods business and her mother was a housewife; her family was Jewish, and so she grew up witnessing anti-Semitism, boycotts and her family’s fears for their own safety. When Epstein was 14 years old, her parents put her on a Kindertransport ship to England, the British rescue operation that saved 10,000 children from the Nazis. She never saw her parents or relatives again. They likely perished in Auschwitz.

“I’m Jewish and I was born in Germany, so I think I can understand what it feels like to be African American in this country,” Epstein says. “I was a child living under the Nazi regime and I lived in a village so everybody knew who I was and that I was Jewish. I remember feeling uncomfortable walking down the street, seeing people cross to the other side of the street, or seeing a Nazi I didn’t want to pass by.”

In the aftermath of the war, Epstein worked as a research analyst for U.S. prosecutors during the Nuremberg Medical Trial. In May 1948, she arrived in New York City and immediately started working at the New York Association for New Americans, an agency that brought Holocaust survivors to the U.S. On the first day of her job, an African American woman showed her the ropes at the office and explained that she could take an hour for lunch each day. Epstein’s new colleague offered her a list of lunch spots in the neighborhood.

“I said, ‘Could we go together?’” Epstein recalls. “She said no, but I didn’t think anything of it. I was asking her one minute before lunch, so I said, ‘Maybe tomorrow?’ She said no! I wasn’t sure what that meant. A few days later, I asked her again and she said no. I was beginning to feel uncomfortable. I said, ‘Is there something about me that troubles you? Is that why you don’t want to have lunch with me?’ She said, ‘You know why.’ And I said, ‘No, I don’t.’”

After the woman explained why they couldn’t eat at the same restaurant, Epstein remembers thinking, “Wait a minute. Lincoln freed the slaves. This is 1948. You can’t go to eat where I go? Isn’t someone doing something about this?”

Epstein hasn’t stopped fighting for justice and civil rights ever since. She has fought for abortion rights, anti-war efforts and fair housing. She is also an active supporter of the Free Gaza Movement and has traveled to the West Bank five times. In 2004, she says she was detained at an airport in Tel Aviv, where she was strip-searched and internally searched. A couple of years later, during a peaceful demonstration in the community of Biilin, near Ramallah, she was tear gassed. Sound bombs went off next to her, and she lost some of her hearing.

“The basis of who I am today was what my parents taught me and what I saw. They were examples to me of how one lives and how one does not persecute other people,” says Epstein. “I would like to think that they’re proud of me.”
Since her arrest yesterday, she has received countless emails and phone calls. “I usually go to bed around 11:00 but last night I was still on the phone and still answering emails. I got to bed sometime after midnight. At 6:20 this morning, the first phone call came in.”

“I’m a bit concerned that I’m the focus of what happened, but the focus should be the violence in the streets and the violence by the police,” she says. As she told The Nation while being escorted to the police van, “I’ve been doing this since I was a teenager. I didn’t think I would have to do it when I was 90. We need to stand up today so that people won’t have to do this when they’re 90.”