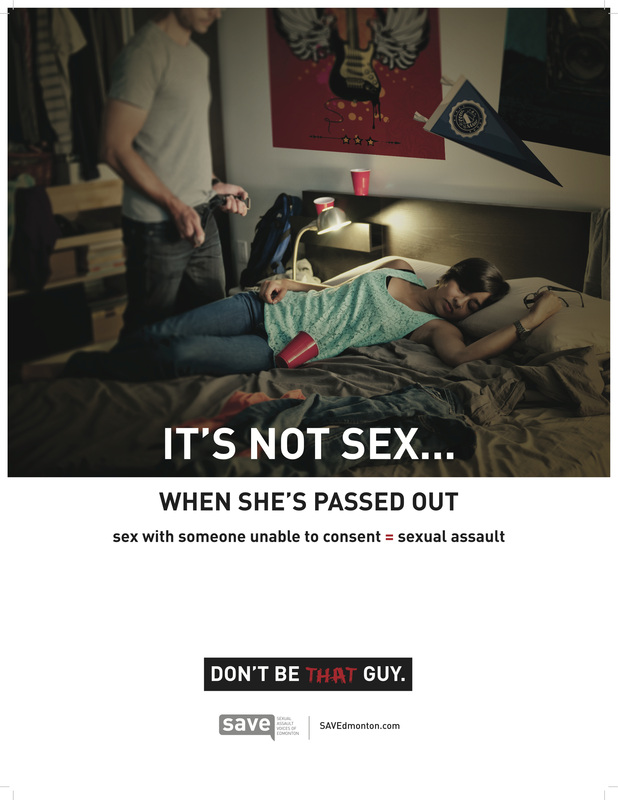 WE DREAM OF A WORLD WITHOUT SEXUAL ASSAULT….
… and we’re on our way to creating that world. SAVE – Sexual Assault Voices of Edmonton – is a broad-based coalition comprised of educators, NGO’s, sexual assault counselors, the Edmonton Police Service, caring/invested businesses, and individuals who are committed to creating a safe community and city for everyone. Our common goal is to reduce the incidences of sexual assaults by reaching those who are responsible: the perpetrators. Why? Because sexual assault is a problem in our community. Every week, the Sexual Assault Centres and police see people who are feeling confused, ashamed, and in pain because they experienced sexual violence. We believe Edmonton can be a leader for change.

What you can expect from us is a series of campaigns with the aim of educating the public to reduce the incidences of sexual violence. Through these campaigns we will raise awareness, challenge myths, fight victim-blaming, empower bystanders, and stand in solidarity with survivors. We see Edmonton as a community that is looking for a shift to one that that is about respecting one another. SAVE wants to be part of this change. The way that we think about and respond to sexual assault is evolving. And it’s time.

WHY OUR CAMPAIGNS ARE DIFFERENT
Typically, sexual assault awareness campaigns target potential victims by urging women to restrict their behavior. Research is telling us that targeting the behavior of victims is not only ineffective, but also contributes to and increases self-blame in survivors. Instead, the SAVE campaigns targets potential offenders – ultimately the ones who hold the power and responsibility to end sexual assault.. By addressing sexual assault without victim-blaming, we intend to mark Edmonton on the map as a model for other cities.