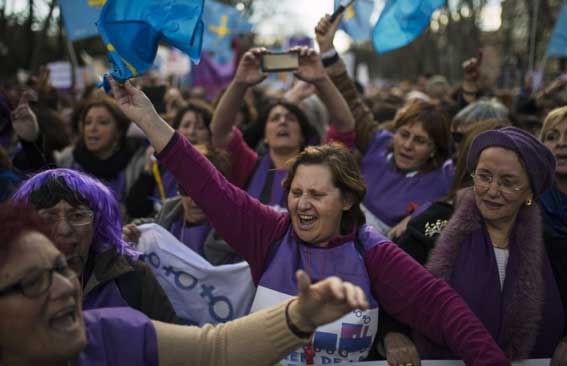 The EL celebrates the feminist mobilizations, which has won the battle against the reactionary project of abortion law of the Spanish right government

The Party of the European Left (EL) congratulates to the feminist movement and to all the organizations, and parties of the European Left, especially the PCE and Izquierda Unida, for the victory obtained in its struggle, in the streets and in the institutions, to manage to stop the retrograde draft of abortion law that the Popular Party pretended approve in Spain limiting the fundamental right of the women for free abortion. Having been adopted, something possible with the absolute majority of the Popular Party in the Parliament, Spanish women had been forced to abort in hiding, on the fringes of the law or to do so abroad, as in the time of Franco’s dictatorship. It was a clear offensive against women but also against equality.

The EL welcomes the withdrawal of the project, which has led to the resignation of the Justice Minister who defended it until the last moment. This withdrawal is a success not only for the women who live in Spain, but to women in Europe and all around the world. It is also the demonstration that with organization and mobilization is possible to stop the rights policies.

The EL, that the March 8 launched a successful European campaign with the name “Changing of the Freedom”, with demonstrations and actions by all the countries in which it works, will continue defending in all Europe the right for free abortion. Fourth woman on the left, Maite Molla, the Spanish vice president of the EL, who has been on the forefront of EL’s fight and European mobilization.