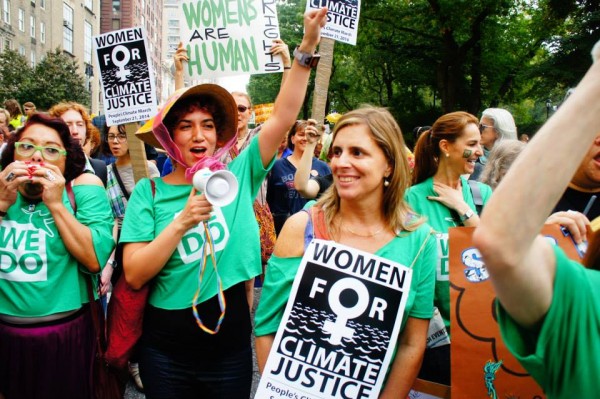 Hundreds of women and men, friends and family, feminists, activists, and allies, including long-time gender equality champion, former President of Finland, Her Excellency Tarja Halonen, marched together at Sunday’s People’s Climate March in New York City to proclaim that there can be “no climate justice without gender justice”. This sentiment acknowledges that women, particularly in the Global South, have contributed the least to global warming and degradation of the planet and yet they suffer the most from environmental destruction that results from unsustainable consumption and production patterns. It also indicates that any chance at truly combating climate chaos will only be achieved through a paradigm shift in leadership, with women and men equally represented in decision-making at all levels.

Katherine Garcia, Co-President, Metro NY Chapter of the U.S. National Committee for UN Women shared, “While the effects of climate change are felt around the world, women bear a heavier burden. Effects such as drought, flooding, and unpredictable temperatures impact women who are providing food, water and firewood for their families. In the context of climate change, supporting gender equality and women’s empowerment is as vital as ever. The People’s Climate March was an opportunity to show the world how critical and timely the climate movement is right now.”

Alina Saba, Mugal Indigenous Women Upliftment Institute & Asia Pacific Forum on Women Law and Development ( APWLD) stated, “Climate change is essentially a social justice issue. Indigenous women have caused the least harm to this planet. Indeed, those who have nurtured and cared for our environment are the very same people being punished for the excessive consumption and pollution of the obscenely rich. Indigenous women in Nepal are a prime example. With increasing landslides, floods, melting glaciers and unpredictable monsoonal rains there will be no choice for them but to leave their  ancestral home, culture and tradition in order to survive. For their sakes we need more than a new climate deal, we need a new global order that finally delivers development justice.”

The ‘Women for Climate Justice’ contingent at the People’s Climate March, coordinated by the Women’s Environment and Development Organization (WEDO), was supported by groups from over 40 local, national and international organizations and alliances, including large U.S. organizations such as the National Organization for Women (NOW) and the League of Women Voters, local groups such as the Women’s City Club of New York and international allies and partners such as the Greenbelt Movement-Kenya, 1 Million Women- Australia, Equidad de Genero-Mexico, Voice of Women-Maldives and DIVA for Equality-Fiji. A full list of supporting organizations can be found here.

As part of highlighting the social and gendered impacts of climate change, the contingent brought demands for a new model of sustainable development. They called for safe, people-centered renewable energy systems and a more equitable distribution of power, resources, energy, and wealth between countries, between rich and poor and between men and women.

Noelene Nabulivou of Fiji, Diverse Voices and Action for Equality, DAWN, and Pacific Partnerships to Strengthen Gender, Climate Change and Sustainable Development shared the importance of taking account of gender equality in climate policy. “Women of the South are particularly tired of hearing politicians and other development partners give one excuse or another for why the strongest and useful climate mitigation target of 1.5 degrees is not possible, why adaptation measures do not concentrate on gender equality, human rights and social justice, why there have not been fundamental changes to our global economic and development systems, why climate finance is not easily accessible, and a loss and damage mechanism is not yet ready. The truth is that we are suffering now, our communities are already dealing with all kinds of economic, social and ecological damage because of the actions of the few, and the impacts on the world majority, indigenous peoples, and people from small island states, among others, are many and immediate. We need urgent national, regional and global action, and this march was to let everyone know, that the time is NOW!!”

Climate change is an issue of justice and inequality around the world and here in the United States. Alicia Grullon, a Bronx based artist and organizer for PERCENT FOR GREEN, added, “I only need to look at Detroit and the South Bronx to clearly understand that the most vulnerable to pollution and human rights violations of natural resources in our country are the poor and working class, who are largely communities of color. The connection between racism, environmental quality, lack of economic and educational resources is undeniable and still persistent for over 600 years. The time has come for action. As a woman of color, a child of immigrants, and parent my responsibility is to be part of the solution.”

Highlighting the importance of a strong women’s presence at the march, Bridget Burns, Advocacy and Communications Director, WEDO, added, “Climate change is the crisis of our times. For too long now, political posturing, greed and complacency in ‘business as usual’ has taken precedent over justice, equality, action and ambition. But change is not something which you wait for, its something that you make happen. On Sunday we marched in a spirit of common purpose with fellow women’s rights leaders, feminists and activists to demand climate justice and ignite a movement for change.”

“Nature will not wait while politicians debate. It is time to demand action that addresses the roots of the climate crisis and fosters justice for the Earth and present and future generations that is why WECAN joined the People’s Climate March. The opportunity to prevent the worst impacts of climate change will be lost forever unless the global community changes course immediately. Governments must act now. We all must act now. If we do not, our children will look back at us wondering why we did not act when we still could have made a difference.”

“Climate change affects everyone, but not in equal ways. It will take everyone, both men and women, as equal participants in climate action to bring real lasting solutions. That means empowering those most impacted by the changing climate to take action, especially women – they are uniquely positioned to be the true agents of change. As a representative of Global Gender and Climate Alliance (GGCA), I joined people around the world gathering together for the People’s Climate March to call on our leaders to action, not words. The time to act is now. It’s that simple.”

“I marched so that young girls will not have spent a significant amount of their youth collecting water, fuel, and recovering from climate disasters by the time they reach my age. I want climate justice for my generation and all generation to come.”

“On September 21st, I marched, not as I, but as WE. I join with all women who have shown time and again that they can think ahead, and envision the future, not only with good judgement and logic, but also with imagination and empathy, fueled by facts and personal witnessing.  The earth’s temperature is rising and I know, as a mother and grandmother, that we must be as concerned about that 2 or 3 degree rise as we would be if it was our own child, up all night, running a 102 degree fever. We are learning to think in a new way toward a future we will never see.  As women, we are caretakers as well as leaders, guardians of our home, our earth.  The People’s Climate March was the beginning of an urban and global movement of civic leaders and citizens working together over the next months and years on behalf of climate change and environmental justice. On September 22nd, that movement begins.”

“I marched in the Peoples Climate March because we need true solutions to halt climate change, based on human rights. I am afraid that some of the large corporations involved in the Climate Summit are not willing or able to move away from energy sources which are killing people and the planet. In particular i am concerned about nuclear energy being promoted as a solution, a false one, as it is overall the most damaging of all energy sources and the risks are unacceptable for humanity. When we only apply “carbon” as the sole measure we risk choosing unsustainable pathways, all decisions have to be based on a broader sense of justice, rights and sustainable development in harmony with our one and only planet earth.”

“Climate change widens the gender inequality gap. This aggravates women’s vulnerability to climate change due to their social exclusion in developing communities, inadequate resources, retrogressive culture and lack of mobility. In addition, lack of economic and social rights contribute to disproportionate losses of lives among women than men during disasters such as droughts, floods, mudslides/landslides, tsunamis, among other hazards.  The situation is worsened by inadequate representation of women in decision-making processes at the household, community and policy levels, thus limiting their contribution. By marching we marched for all of those women across the world who need change but cannot voice their needs – decisions that impact their lives are made far away from them, and often without their knowledge. Climate justice is needed for global transformation and the empowerment of people. It is an essential part of development.”