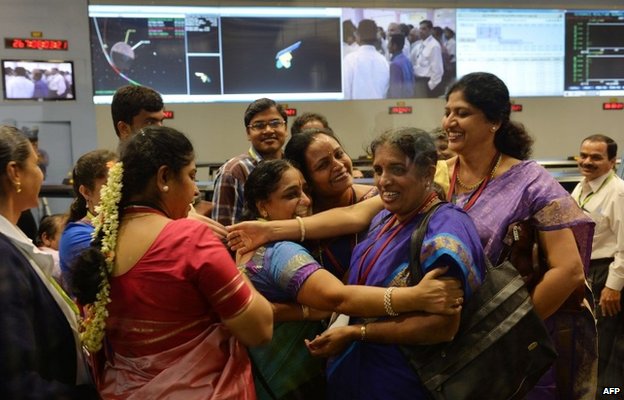 When the crowded command control room of India’s Mars mission exploded into applause after it successfully put a satellite into orbit around the Red Planet, photographer Manjunath Kiran of the AFP news agency clicked this remarkable image of scientists congratulating each other.

But in reality, the picture was about much more than that – a bunch of smiling Indian women resplendent in gorgeous saris greeting each other as their male colleagues look on admiringly at mission control in Bangalore.

“The women were leading the applause when the good news arrived. They were celebrating more than men. Who said men are from Mars and women are from Venus?” says senior science journalist Pallava Bagla, who was present in the control room.

The picture – which brightened up my manic morning writing up the Mars mission story – went viral and became the event’s image of the day.

People in their thousands tweeted that they loved it. One said “when was the last time you saw women scientists celebrate a space mission?”; another that the women showed “we don’t need to wear labcoats”. Others said the scientists in saris had “redefined mission control” and called them “true role models”.

The chatter even veered into the contentious Indian debate about tradition and modernity.

Look at our rocket scientists, said one tweet, when women working in call centres think that wearing jeans “makes them modern and scientific”. Somebody wondered why “no matter how much women succeed/achieve, the focus ultimately is on what they are wearing?” That, another respondent tweeted, is “because we have newspapers telling us that smart career women don’t wear saris only western business suits!”.

Although we do not know for sure whether all the women in this picture are engineers or scientists, they all probably work with India’s space agency. Some 20% of Isro’s 14,246 employees are women and their numbers are growing.

Nandini Harinath, 44, a physicist and a mother of two, was the deputy operations director of the Mars mission – in other words, she was the person “operating” the spacecraft between Earth and Mars. “It’s easier to bring up children than to control the Mars orbiter,” she told the NDTV news channel. Minal Sampath and her team built three instruments for the spacecraft and she wants to become “the first woman director of a space centre”.

A woman leads one of the agency’s main strategic programmes. Another female engineer was in charge of wheeling out the 15-storey-high 320,000kg (320 tonne) Satellite Launch Vehicle (SLV) from the vehicle assembly building to the launch pad. Tessy Thomas, a scientist from India’s Defence Research and Development Organisation (DRDO), is thought to be one of the very few women working on strategic nuclear ballistic missiles in the world. Three women led a team which launched a communication satellite three years ago.

What next? Will a woman head India’s space agency one day? (All seven chairmen of Isro so far have been men.) And, as Pallava Bagla writes, Isro reckons that the first astronaut from India “could well be a woman”. When that happens, Indian women will be over the moon.