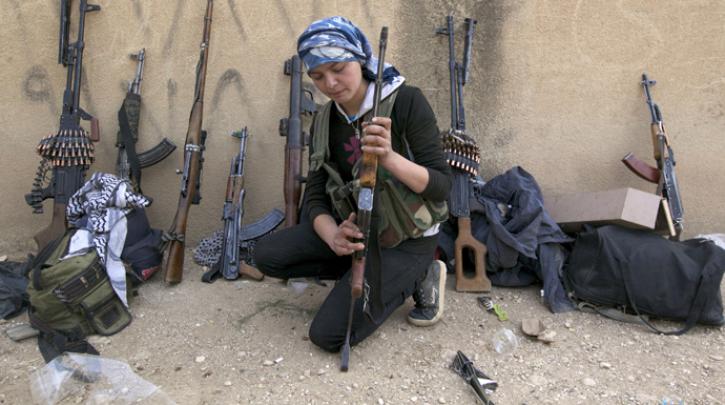 BEIRUT, Nov 9 (Reuters) – Officials in a predominantly Kurdish province of northeastern Syria have issued a women’s rights decree, monitors said on Sunday, in an apparent rebuke to the hardline views of Islamic State insurgents who have advanced in the region.

Islamic State, which has declared a “caliphate” across large areas of Syria and Iraq it has captured, has issued rules on how women should dress and has curbed their movement outside the home, basing this on a radical interpretation of sharia (Islamic law), according to residents living in territory it holds.

The 30-point decree issued by the joint leaders of the “self-ruling democracy of Jazira province” aims to safeguard and strengthen women’s rights in semi-autonomous areas, the head of the Britain-based Syrian Observatory for Human Rights said.

Jazira refers to an area in the northeast province of Hasaka that has gained self-rule during Syria’s civil war. One of the leaders of the area is Kurdish and the other Arab, according to Rami Abdulrahman, who runs the Observatory.

Kurds hold about half of the province while Islamic State has about 30 percent of Hasaka, mainly in its south and southeast, the Observatory says.

The decree called for “equality between men and women in all spheres of public and private life,” and said women had the right to run for office and an equal right to work, pay and inheritance. It was not immediately clear whether the decree was legally binding or how it would be implemented.

In its English-language magazine last month, Islamic State provided what it called religious justification for the enslavement of women and children as spoils of war. The al Qaeda offshoot has been accused by rights groups of kidnapping women and forcing them into marriage.

Abdulrahman said some elements of the decree already existed in the region but others would improve the rights of women.

Parts of northern Syria have been experimenting in self-rule since last year after Kurdish fighters seized territory in the chaos of Syria’s civil war, a development giving increased autonomy to the long-repressed Kurdish minority in the country.

Kurdish forces have also been fighting off Islamic State militants in northern Syria, including the besieged town of Kobani on the Turkish border whose defenders have been bolstered by U.S.-led coalition air strikes on insurgent positions.