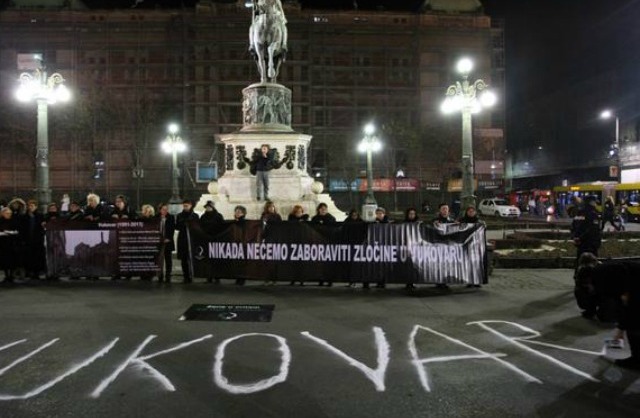 Activists gathered in Belgrade to pay tribute to those who died during the siege and occupation of the Croatian town which fell to Serbian forces 22 years ago.

Carrying a banner with the slogan “We will never forget Vukovar”, members of the Serbian campaign group Women in Black gathered on Monday evening in Republic Square in Belgrade, standing for an hour in silence and lighting candles for the victims of shelling of Vukovar.

The 22nd anniversary was also marked in Vukovar itself on Monday, but was overshadowed by a dispute between the Zagreb authorities and local war veterans over the introduction of bilingual Latin and Cyrillic signs in the town where Serbs make up a third of the population – a move which has sparked angry protests.

In Belgrade, Women in Black recalled the devastation of wartime.

“During 1991, Vukovar was under siege by the Yugoslav People’s Army and Serb paramilitary units for 87 days. More than 1,000 civilians were killed, more than 25,000 people were wounded, while thousands of sick and wounded prisoners were taken to detention camps in Serbia,” said the head of the group, Stasa Zajovic.

Meanwhile Croatian human rights organisations Documenta, the Centre for Peace and the Citizens’ Committee for Human Rights used the anniversary to urge local courts to continue prosecutions “bearing in mind the gravity of the crimes committed, where 86 children died and 6.5 million grenades fell on the town”.

In Vukovar, Croatian political leaders didn’t take part in a march alongside the veteran-led group, the Committee for the Defence of Croatian Vukovar, which has been waging a campaign to ban Cyrillic.

“Through the years the whole of Croatia was in Vukovar together to pay homage to the victims and heroes of the town. But today, the organisers from the Defence split Croatia, due to the interests of everyday politics,” Josipovic complained.

The veterans’ march was joined by Croatian generals Ante Gotovina, Mladan Markac and Ivan Cermak, who were all acquitted of war crimes by the Hague Tribunal.