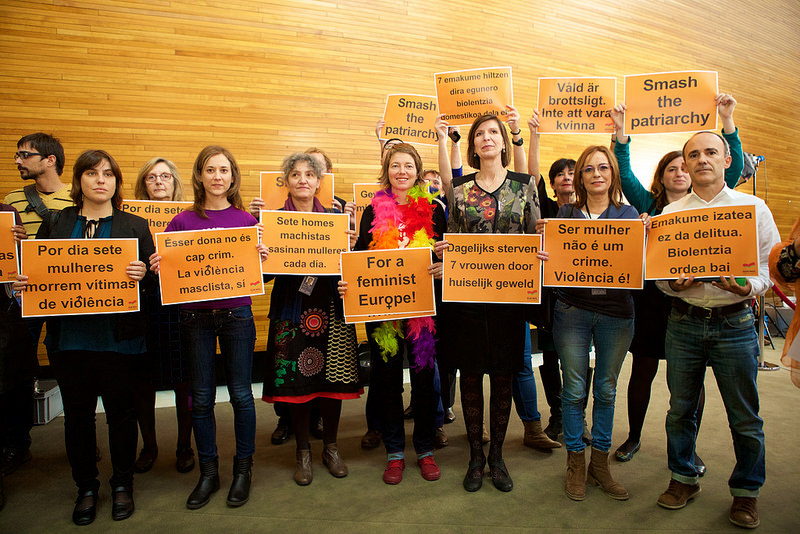 After staging a group action outside the Parliament’s hemicycle before the debate on combatting violence against women (see here), GUE/NGL MEPs this afternoon called for legislative action at EU level as well as ratification of the Istanbul Convention by all member states.

“We have talked about statistics – terrible statistics that show the terrible realities of women, yet the justice system does not condemn these crimes,” said Swedish MEP Malin Björk. “We need to change this culture as well as a culture in which women’s bodies don’t belong to themselves and in which sexist comments are being made against women and children all the time.”

“We want to see an EU legal instrument against violence against women and girls. We hope that the urgency of this issue will push the Commission to finally address this basic human rights issue in a more coherent way and that all the member states ratify the Istanbul Convention.”

“Violence against women doesn’t respect borders, class or income,” said Greek MEP Kostadinka Kuneva. “It exists both within the family as well as in society at large. The human rights of victims must be respected and we must hear their voices.”

MEP Kuneva described a “new wave of economic violence” occurring in Greece where women are forced to take pay cuts and are being encouraged not to take maternity leave. “This is also a form of violence against women.”

“If we want to tackle violence against women, we need regulations and a proper framework of legal protection.”

The GUE/NGL group is made up of 52 MEPs from across Europe working for peace, solidarity, social justice, equality, democracy and human rights in Europe and beyond. It is the only gender balanced group in the European Parliament.