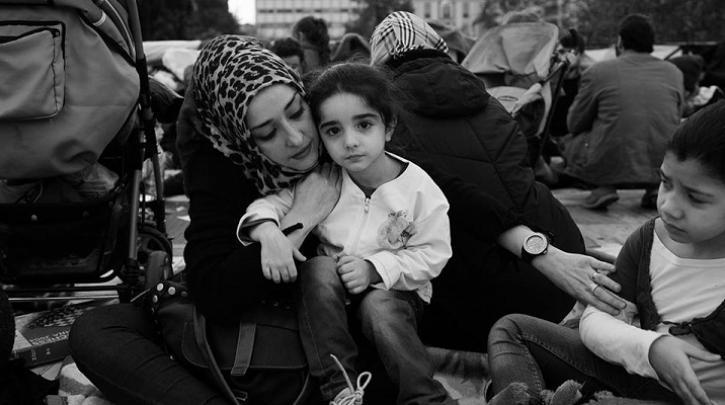 How did you get here?

I came to Greece with an inflatable boat and nearly died.

Which island did you first reach?

Did all your fellow travellers on the inflatable boat live?

They damaged the inflatable so that no one can go back.

The trafficker or someone from us did it so that we can’t go back. That’s when some people died.

How many people were you on that boat?

And how many of those died?

I don’t know how many died, because I heard several different numbers. Probably, it is young childred that died when they tore the inflatable boat apart.

Did you and your family come along with Fatime?

Aziza: No, we came here via another route.

Did you come with an inflatable boat too?

No, we used a bigger inflatable which has rubber underneath, that is, it is safer.

Where did you arrive?

They got us in Alexandroupoli. They held us for 15 days in prison and then we came here (Athens)

How did you travel from Alexandroupoli to Athens?

How old are you?

Do you have children?

Yes, two of them. Here they are!

Do you have family back in Syria?

My parents have died in the war in Syria

Are you her husband?

How old are you?

And you, Fatime, how old are you?

Have you got children?

No, they are in Turkey. I want to go to Europe and take them along when I will apply for asylum

Where do these rapes take place? Here or in Syria?

On the road, here, there, anywhere. They rape or they do other things, otherwise they will abandon you halfway

Does this mean you have been raped?

Something like that happened to me indeed… I’ve learned from other Syrian contacts that in Syrian villages they storm your house and take away girls 13-24 years old.

Where are they taking these girls?

The Jihadists are doing that. They take girls away and rape them. Then they sell them or simply kill them

How are things for you here? Do you want to tell me something about your experiences here? Where do you live? How are Greek treating you? What are you eating?

The first thing we realized was that the Greeks are not renting their houses to Syrians. Second, we sleep rough here because the hotels are full and those who stay there sleep on the floor too. Our children are going through this as well

Are you facing any danger sleeping rough, other than the rain and the cold?

Here in Syntagma where we have been for several days we haven’t experienced anything. But if we were in Omonoia, I know we would see other things.

Do you have any relatives in any EU country?

Aziza: Only me. I’ve got a relative in Sweden. Our parents have all died in the war.

Can’t you prepare your papers for “family unification”?

No you cannot do that. I know this from many people who have tried and whose application was rejected. (it only covers parents with children, with the proviso that the children are underage)

You tell us, what is your demand?

Fatime: What we want from Greece is to be left free to leave. Because the traffickers will pick us up either from the sea or Macedonia, there is a route to follow on foot up to Serbia. We just want a way to leave. We don’t want asylum or anything from Greece. Just to leave by any possible means.

We learned that two people from you, tried to escape and died on the way. One of them a 55 year-old doctor, as far as I know. Have you got any information on them? Do you know their names?

No, we don’t know anything about them. These things happen all the time.

I’d like us to return to what you mentioned before about the rapes by the traffickers. In these groups you travel are there no men? What is their stance?

There is no men. The groups are formed by 2-3 women. It’s not really a group, just a few people. Especially if they see a woman that wants to travel alone they put her on the spot.

Did you make any formal complaints somewhere?

When you come here, how do the authorities treat you, especially the women and children?

There is not much difference for us.

And you, Leyla, how long have you been here?

Leyla: Nine months. I came here pregnant and gave birth to my baby. We want you to report everything we are telling you so that the people will know. EU should know, not only Greece. We are thankful. But since Greece cannot help, we need help from abroad. When I gave birth here, they kept my baby because I didn’t have money to pay for the operation. Now we sleep rough.

Where is your husband?

My husband died two months ago in Syria.

Fatime: Mine is lost somewhere in Syria, we don’t know where.

So, your children who are they staying with in Turkey?

With my sister, she is 18 and taking care of them

Leyla: Myself, I’ve got a big problem because I gave birth here. The hospital and the Ministries are telling me that in order to declare the birth, I need to bring some paperwork from Syria. And like I said, my husband who was there, has now been lost. In Syria everything is ruined. If I go there, I will never be able to flee again.

Can’t they do this procedure themselves?

For that to happen I need a paper from Greece proving I gave birth to this child here. At the hospital though they gave me nothing.

So, essentially, this baby does not exist.

That’s right. For instance, if I want to go back to Syria, they will not allow the baby through. It does not have any documents, they will say “where did you find it?” Here, my baby has been sleeping for a week on the square. For these reasons, we need you as much as you can to publicize our case.

It became known that the municipality and the church are giving shelter to the Syrians. Is this true?

They only give that to homeless people. The church is giving you some pasta and then you have to leave. We are all the same, after all. We are all in dire need. We cannot go the church. The only support we receive is from other Syrians who are in Greece, but we cannot stay with them for long, maybe for just a day or two. After that, I have to leave because they cannot cover my expenses, let alone, my baby’s expenses.

Some time ago, I met a Syrian woman who had five children and told me she was going to the street market and collected whatever was left over. But they people were chasing her down. Have you tried something similar? Did you encounter any reactions by the public?

I have never tried it, we are really scared. If we died in Syria, we would have died once, here we die everyday.

The translator who helped with carrying out this interview, added: if someone is going to the airport, he is arrested, even though they know he is Syrian. In some airports they keep you and then they transfer you to the prison. I’ve heard stories like that about Thessaloniki, Kalamata, and Athens. They keep you for 20 days and then they let you go. This is despite that they have seen your papers, proving you are a refugee and according to the law the refugees cannot be legally prosecuted or imprisoned for illegal stay in a country. In Athens, you are transported to Amygdaleza, they keep you for 20 days and then they let you go with a document that says that you are obliged to leave the country within 6 months. A friend of mine has been arrested three times because his document has expired and he has been sent to Amygdaleza. He was never given any other document that would release him from this status. What’s more, this friend speaks Greek. They all say “that’s the law”, and that’s where the discussion ends. In Bulgaria, things are different. The authorities there are giving the people travel documents to continue their journey.

Leyla, Fatime and Aziza were found by L. S. in Syntagma square, 14-12-2014, and their brief chat was recorded in order to be disseminated, according to their own will. Early next morning, at 3am, the police rounded up nearly 600 refugees in Syntagma and transported them to the Aliens Sub-Directorate of the Hellenic Police, in Petrou Ralli st. All their documents were confiscated (passports etc.) and the police gave them 30 days to leave the country. Of course, they were given no other document, which they are entitled to, according to refugee law and so they cannot travel to any EU country. Today, Monday, 15-12-2014, they were released, but in lack of documents, housing and food, they have to make do again on the streets of Athens simply by their own means.