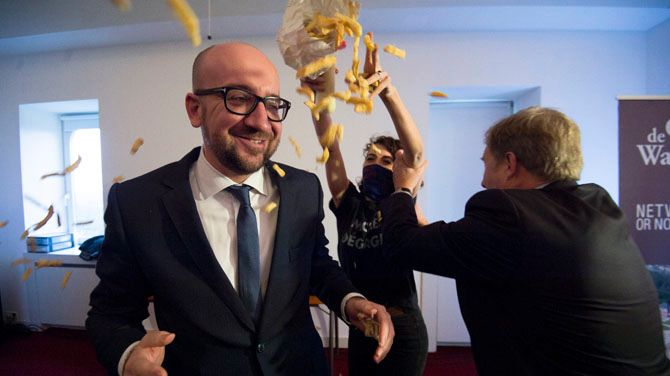 This Monday December 22nd 2014 at 1pm, the Belgian feminist activist group LilithS celebrated this season of impoverished goodwill by offering flying french fries to prime minister of Belgium Charles Michel.
Michel was speaking at a private conference, presenting his political and economic program to a roomful of Wallon business leaders and financiers, when he was interrupted by three LilithS yelling “OUT WITH AUSTERITY! MICHEL, GET OUT!” while throwing handfuls of french fries and spraying the prime minister with mayonnaise.

The activists wore t-shirts bearing the slogans “Michel, get out!” and “Which social on your fries?” (a play on words that replaces the word “sauce” with “social” in the classic french fry vendor phrase.)

The Belgian social model is being destroyed in the name of market competitiveness, an absurd race to nowhere which leaves the population eating dust… or french fries, with austerity on the side. This is why we, LilithS, have chosen to throw this symbol of Belgium in the faces of those who would see the country dismantled.

Belgium would be better off with no government at all. Michel, get out!

We were able to read the press release announcing this event issued by the “cercle Wallon”, the private club which hosted the event. Here is a particularly scandalous passage :

“The prime minister will be defending his program two days after a lively December 15th. Although many of the measures he puts forth are welcomed by the economic community, they generate popular concern, maintained by prejudices that barely mask the interests of those who distill them.”

The sentences above give us an idea of the contempt in which the elites hold the demands of the people : a national strike is described as a “lively” day, and the population is made out to be little more than a puppet.

This “popular concern”, as they call it, is in fact anger; the anger of a population watching its future trampled by measures which “barely mask the interests of those who” support them! The people have taken to the streets with a sharpened political conscience, so you’d better watch out.

We will not tolerate your budgetary cuts, your immigration policies, your criminalization of poverty, your surveillance society! We will attack the truly gangrenous elements in our society: real estate speculation, market deregulation, fiscal evasion. The supposed fraud in the social system does not compare to the real thing.

This fascistic government has left the people with no choice other than collective resistance: whether by strike or direct action, by popular assembly or democratic debate, we will not allow ourselves to be plunged into misery!

We are many. We will bring the public outcry into the private domain of power, whenever necessary.