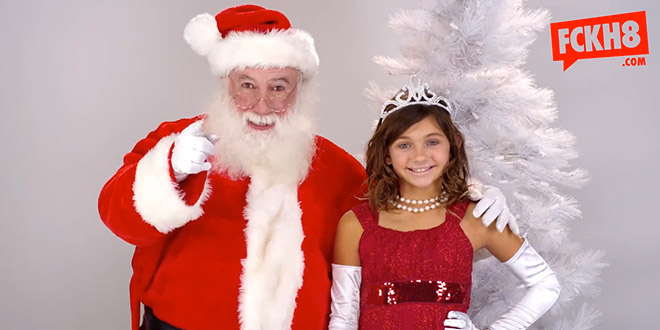 They may be on the naughty list but these pint-sized princesses are determined to teach a sexist Santa Claus about women’s rights.

The young girls caused a stir earlier this year with a video highlighting sexism against women, and in the Potty Mouth Princesses’ latest film they’re back to promote equal pay.

Dressed in their finest fancy dress, the group of American actresses first brought attention to themselves with their video Things More Offensive Than The Word F***. They turned the air blue as they effed and blinded about women’s issues asking, what is more offensive, a little girl saying ‘f***’ or the inequality that today’s women face?

This was followed up with a second video highlighting the likelihood that their generation would suffer at the hands of domestic violence.

Now in their festive film the princesses ask, ‘What if Santa was sexist?’ in a bid to expose the shocking truth of the gender pay gap.

The video opens as it aims to go on – with a swear word three seconds in. MailOnline has bleeped out the offending words but has kept the rest of the video intact.

The opening scenes sees little boys and girls opening their Christmas gifts however where boys get skateboards and footballs the girls receive broken versions of the toys.

One of the young ladies then asks: ‘How sh***y would it be if Santa was as sexist as society?’ and after opening their inferior gifts the girls say ‘What the f***, Santa? This is sexist bull****.’ In the opening scene, boys and girls open their gifts from Santa only to find the girls’ gifts are somewhat inferior, a direct comparison to the unequal pay that many women still receive in the workplace What is more shocking than primary school children using the ‘F’ word is the sobering statistics that Father Christmas reveals to the angry princesses.

Comparing the girls’ smaller presents to wage slips, Santa says: ‘This is how society pays women. Get used to that. Women are paid 23 per cent less with less opportunity to work. Girls should accept it.’

This fact is not taken lightly and one of the girls snaps back at Santa, calling him a ‘sexist jerk’. Santa continues to point out that shockingly this pay gap is nothing to do with a lack of skill and that even women who are more talented than their male peers will still receive a significant wage cut.

‘Women who get As are paid as much as guys who get Cs in class’ he points out.

In reaction to this the young girls passionately express their dissatisfaction with the salary system.

‘It seems women are valued less for their brains and more for the shape of their ass,’ one says.

‘And Grinch-like politicians are here to ruin our holiday,’ another adds. One of the seasonally dressed girls adds that shockingly, ‘not one f***ing Scrooge republican voted for equal pay.’

Being Father Christmas it comes as no surprise that all of this swearing isn’t going down well when it comes to getting on his nice list.

‘The naughty use of the “F” word gets me bent out of joint’ says the festive figure, but the girls are quick to point out that being polite has not got their previous generations any closer to equality. ‘Well for decades nice women have been ignored making this point,’ responds one of the princess posse.

‘So if you won’t stop society from treating us like b****es and ho ho hos it won’t just be your f***ing reindeer who has a red nose.’

They continue their point with a festive theme as one of the princesses holds up two baubles and says: ‘To get treated equally we shouldn’t need balls.’

When Santa asks what young girls want to find under the tree this Christmas the girls say: ‘How about the f***ing long overdue gift of equality?’

At this stage Santa is entirely convinced and agrees, ‘Yeah, I’m totally f***ing down with that.’

The girls swearing may be shocking but it is sure to capture the audience’s attention with the original video attracting over a million views on YouTube and their latest currently having almost 10,000.

The film’s director Luke Montgomery said of his domestic violence video that he understands it is shocking and could be considered offensive but says that the statistics themselves are the really offensive issue.

‘Society needs to clean up its act,’ he told the Design Taxi site. ‘I’d rather see these girls in abuse make-up speaking out today so when they are older maybe less women will have those injuries in real life.

‘In a culture that abuses women daily with things like paying them less than men for the exact same work, is it any surprise that so many men think they can abuse women too?’

The video is part of the American FCKH8.com T-shirt company’s charity T-shirt fundraising effort and ends with the organisation showcasing their anti-sexism tops bearing the slogan ‘Men of quality do not fear equality’.