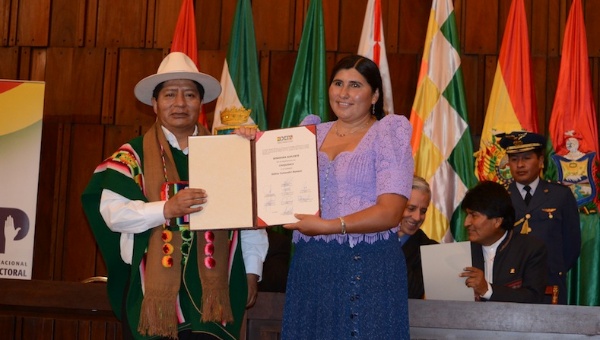 Bolivia is reportedly the second country in the world to reach this level of representation of women in national legislative body.

The Plurinational Legislative Assembly, Bolivia’s parliamentary body, will be comprised of 48 percent women in the upcoming session of 2015 to 2020.  According to the president of the Supreme Electoral Tribunal, Wilma Velasco, Bolivia is the second country in the world to achieve such a ratio, with a total of 80 women in both houses of the legislative body.

Representative Betty Yañiquez of the governing Movement Towards Socialism party (MAS) stated that, “Never before have we had laws that are favorable to women. What we have to do is ensure that they are functional, that they are workable, so that there is greater security for us as women, especially the women of MAS. We are going to work with this energy and with this strength in the Plurinational Legislative Assembly.”

The incoming congress will include the Chamber of Deputies, comprised of 50 percent women and the Senate, comprised of 42 percent women. Bolivia’s new constitution approved by popular referendum in 2009 establishes gender equality in the legislative body as a constitutional right, requiring equal representation and participation in electoral processes. In this year’s election, authorities promoted gender equality with the “50/50, Equality is Now” campaign.

Bolivia’s congressional body was reportedly the first in the world where each of the two chambers were headed by women. President Evo Morales has also made a priority of appointing a roughly equal number of men and women to his cabinet.