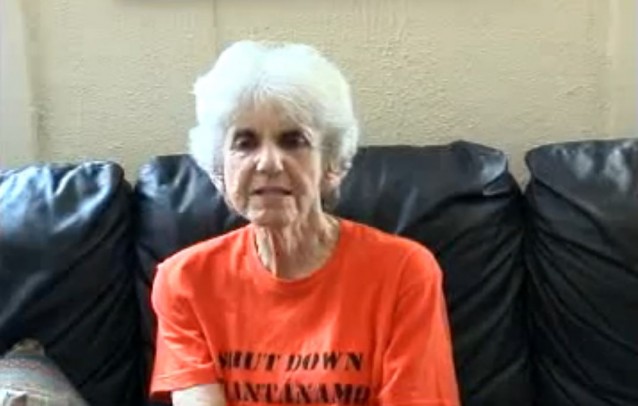 An 83-year old woman was one of two arrested on Saturday, outside the former Vice President Dick Cheney’s home, in Mclean, Virginia.
Tighe Barry, 57, and Eve Tetaz, 83, were there with about 20 activists from Code Pink andWitness Against Torture. Some of the protestors, risking arrest and weathering freezing cold temperatures, reportedly squeezed through the security gates and scattered onto Cheney’s lawn and front porch – in bright orange ‘GTMO’ jumpsuits. Imagine Cheney dazed, just rousing from a nice nap. He opens the blinds, and… (Stay in that moment if you like, you can catch up later.)
The protesters were there to mark 14-years from the opening of Guantanamo Bay ‘Detention’ Camp. The prison known for practicing torture under the Bush/Cheney administration, still holds 127 detainees, and Dick’s head still explodes with pride about it,when interviewed.
Police were called to Cheney’s home, and the protestors were ordered to leave the property, but Barry and Tetaz reportedly haggled with authority, and were taken into custody. They were released after an hour, and will face charges of trespassing and disorderly conduct in court. Did I mention one of the arrestees is 83? I did. Gotta love her. Grateful to them all.
It’s unknown whether Cheney was home at the time, peering through his curtains like Gladys Kravitz, worried and wondering who was outside. You know, he’ll be doing that for the rest of his days. And if Karma comes to this party, he’ll be doing that for the rest of his days – behind bars. Abner!