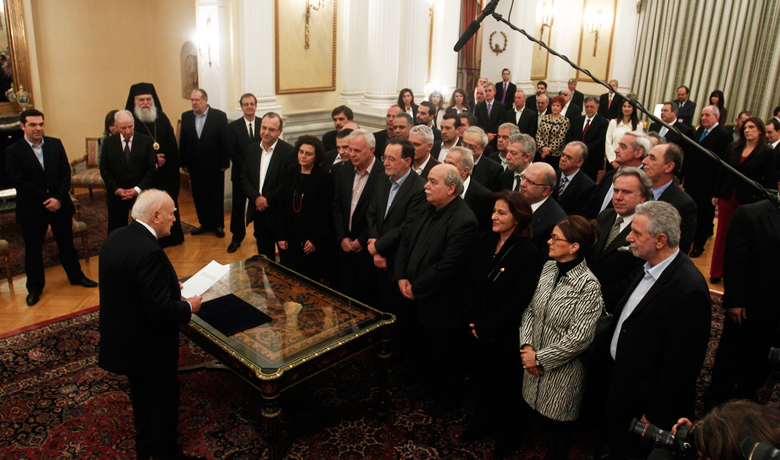 This government, that was built on a hopeful vision about a deep change to be made in economic and social models that had been leading in Greek society for a long time, has disappointed us, feminists, not only because there are only 6 women in a 40-person government (a percentage of 15%, among the lowest ones in Europe), but also because none of them is a minister (only deputy ministers and vice-ministers)!

We do often say that we, women, form “half the sky and half the earth” and we do often hear such sweet and pleasant words from left and progressive male comrades during our common struggles, but enough is enough: women’s public position is in reality lower than men’s.

So, the reality that patriarchal mindsets about women’s skills in the public sphere (at least in this country) are widespread all over the ideological spectrum is once again confirmed. Facts show that, while women are welcome in political spaces to undertake low-prestige tasks, the higher the hierarchy of a party the less are women represented and no women or almost no women ever get a top-position, with decision-making power.

Something similar is observed in political positions of high responsibility and prestige. We should not forget that, when G. Papandreou became the prime-minister, he chose some women from the scientific team we was working with to become ministers, but when things got harder and he had to reshuffle the government, he replaced them, as if they were responsible for the economic disaster and male ministers would be better (and we saw the results).

Back to our days, it is true that the small number of women in the government and the lack of female ministers didn’t go unnoticed by the media. Many journalists, even the state tv channel commented about it, showing that, apart from their will to show their opposition to the government, there is also some sensibility about equal participation of women in decision-making centers.