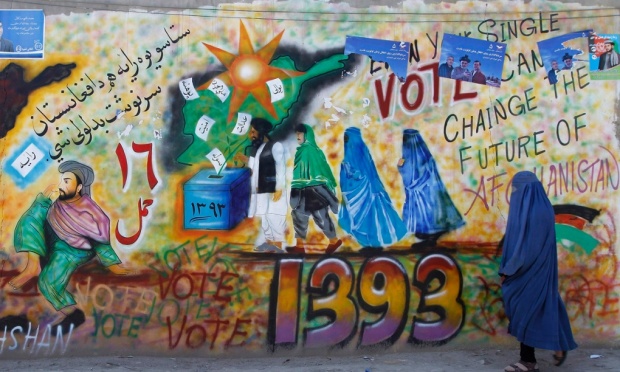 Dozens of women marched in the streets of Kabul on Tuesday, protesting against what they see as exclusion from political decision-making by the country’s new leaders.

The protesters, who gathered in front of the ministry of women’s affairs, complained that in the process of forming a government, President Ashraf Ghani is reneging on campaign promises to ensure female participation.

During his campaign, Ghani promised to nominate at least four female ministers. However, when Ghani and his chief executive, Abdullah Abdullah, unveiled their initial list of cabinet nominees three weeks ago, it contained only three women. After parliament had scrutinised the list and put it to a vote last week, none remained.

Only a minority of the nominees were approved, and Ghani and Abdullah now have to present a new batch of 17 candidates, a process activists are seeking to influence. They would like to see Ghani aim much higher than three female ministers.

In the recent election, women constituted 38% of the voters, said Samira Hamidi, an activist from Afghan Women’s Network who was one of approximately 70 protesters in front of the ministry. “So we should be given 38% of the cabinet, which is nine ministers,” she said.

Early in his presidency, Ghani signalled that political inclusion of women was a top priority. At his inauguration, the president spoke with affection of his wife, Rula Ghani, not only as a mother, sister and wife, but also as someone who would come to hold political influence. Rula Ghani has since been put in charge of an office at the palace that advises the government on internally displaced people.

However, the authority bestowed on the first lady has failed to trickle down. As the cumbersome post-election process has wobbled along, hopes among women’s activists have withered.

“Ghani did not fulfil his promises. His ambitious statements are not taking us anywhere,” Hamidi said.

Though Ghani promised voters that his government would be based on merit and fair representation of gender and ethnicity, he has since come to realise that nothing comes easy in Afghan politics.

For one, Ghani does not wield unilateral power. With the power-sharing agreement he cut with Abdullah, his election rival, authority to appoint ministers is effectively shared between two people, both of whom have support bases to appease. Old power brokers and new campaign-trail loyalists all scramble to get a seat at the government’s table, making it difficult for new figures to emerge.

“There are lots of qualified women, but they have not been considered because they are not affiliated with any of the political groups who are in power now,” said Aziz Rafiee, a male protestor in the demonstrations.

“The political will for support of participation of women doesn’t exist,” said Rafiee, who heads the Afghan Civil Society Forum. “That is very clear.”

Among the women nominated for the new government is Najiba Ayubi, an acclaimed journalist known among women’s rights activists, who was picked to run the ministry of women’s affairs. However, Ayubi was temporarily withdrawn from the cabinet list, due to uncertainty about her university degree.

The two other female nominees, Ai Sultan Khairi and Khatera Afghan, are almost entirely unknown, even among women’s rights proponents. Khairi’s nomination never made it to the floor, as she was accused of forging her identification papers. Afghan was resoundingly rejected, receiving the least approval votes of all the nominees.

“Why they have done this is something we have to question,” Rafiee said. Others, like Hamidi, speculate more bluntly. She points out that a strong presence of women in the cabinet could jeopardise peace talks with the Taliban, which the government is actively pursuing.

As a response to the parliamentary vote, women’s rights groups have drawn up a list of 21 women who meet the criteria of age, educational level and skill to make minister. They have delivered the list to Ghani and Abdullah’s teams, and shared it on social media. With this list, activists hope to counter claims that there are no Afghan women fit to govern.

“We are not in 2001 anymore,” Hamidi said, referring to the last year of Taliban rule. “But even after one decade, rights that should be handed to us are not recognised. We still have to go to the street to take them.”