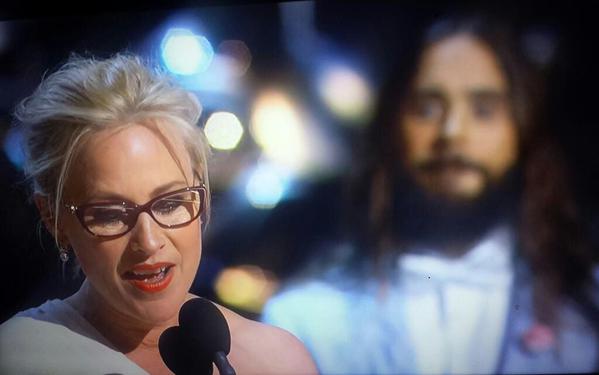 Too often when a white feminist says “we,” she doesn’t mean women of color.

After Patricia Arquette won the best supporting actress Oscar for her role in “Boyhood,“ she offered this in her acceptance speech: “To every woman who gave birth to every taxpayer and citizen of this nation, we have fought for everybody’s equal rights, it is our time to have wage equality once and for all and equal rights for women in the United States of America.” Meryl Streep and other celebrities in attendance cheered Arquette’s remarks.

Arquette has talked previously about income and gender. In an interview with the Guardian, she spoke out about the wage differential for women in Hollywood and elsewhere. In another interview, she stated that she paid her babysitter and dog walker more than she made in “Boyhood.”

But, things took a turn backstage at the Academy Awards press room. After a question about her acceptance speech, Arquette continued:

“So the truth is, even though we sort of feel like we have equal rights in America, right under the surface there are huge issues that are at play that really do affect women. And it’s time for all the women in America, and all the men that love women and all the gay people and all the people of color that we’ve all fought for to fight for us now!”

Again, her remarks were met with applause.

On Monday, Arquette seemed to defend her remarks in a series of tweets that emphasized the importance of wage equality for women of all races.

Nevertheless, Arquette’s comments are problematic. Arquette mentions four groups: “women,” “all the men that love women,” “gay people,” and “people of color.” It’s clear that Arquette’s notion of “women” refers to straight white women. By segmenting the last two groups in these comments, Arquette excludes queer white women, women of color, and queer women of color. Furthermore, Arquette claims “we” [white women] have fought for these people, and she insists that now these people must fight for “us” [white women].

Despite Arquette’s claims, historically, white women’s efforts to support greater women’s equality have been directed toward greater equality for white women. For example, Elizabeth Cady Stanton and some other white suffragists supported the right to vote for white women and refused to backthe 15th Amendment, which allowed U.S. citizens to vote regardless of “race, color, or previous condition of servitude.” At the Woman Suffrage Parade of 1913, African American women were told to march separately—at the end of the parade.*

In our contemporary era, Eve Ensler claimed that she understood the struggle of the slain Trayvon Martin due to her experiences as a woman and used his death to publicize her One Billion Rising campaign to end violence against women. The lack of significant response from white feminists after the events of Ferguson, Mo., has been noted by activists. Headlines question if Beyoncé is “really” a feminist.

The lack of attention to racial issues is one element of some African American women’s discomfort with the notion of feminism. Certainly, some African American women identify as “feminists” or as “black feminists.” Still others may identify as “womanists,” using Alice Walker’s multilayered definition that includes the analogy “womanist is to feminist as purple is to lavender.” Yet for some, the term “feminist” invokes the troubled racial history of white women’s activism and flattens the varied experiences of different types of women who do not face uniform struggles as women.

The historic and ongoing neglect of issues facing women of color has informed the development of intersectionality, a concept coined by Kimberlé Crenshaw in 1989. Intersectionality addresses the interaction of race, gender and other factors and points out the ways in which racism, sexism and other forms of oppression operate simultaneously. What is missing from Arquette’s comments is any awareness of the importance of intersectionality. Yet, such criticism of feminism and white women’s activism is so commonplace that professor Brittney Cooper started a hashtag #AskAWhiteFeminist in response to those who did not understand the furor regarding Arquette’s comments. Online, Cooper and others have expressed their weariness with having to explain basic concepts and criticisms that have been around for so long.

As a teacher, I have to often remind my students to clarify their use of “we.” In class discussion, they are sometimes quick to say “Well, we…,” and I ask, “We who?” I teach at Howard University, a private historically black university, and while nearly all of my students are brown-skinned, not all are African American or Christian or straight. The use of “we” erases diversity and marginalizes those who may be different or may have different views.

As an African American woman, I know that Arquette didn’t include me in her definition of “us.” That’s fine. I never assumed that she was fighting for me.

*Update: The post has been updated to clarify that black women at the Woman Suffrage Parade of 1913 were asked to march at the end of the parade.