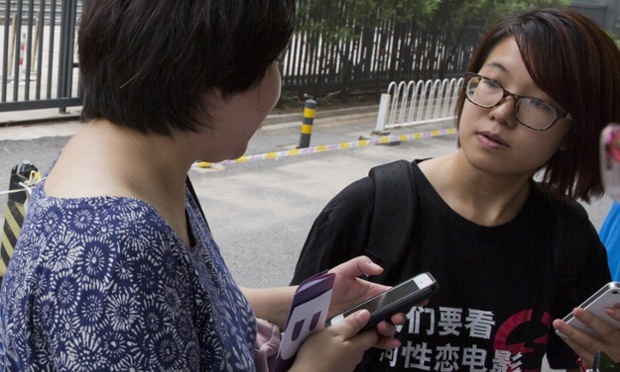 China has rejected calls from Britain, the US ambassador to the UN and others to release five feminist activists detained just before International Women’s Day.

Hua Chunying, a spokeswoman for the country’s foreign ministry, said she had no specific details about the cases, but insisted: “No one has the right to ask China to release relevant persons, so we hope that relevant people will stop interfering in China’s judicial sovereignty in such a manner.”

The women have been held for nearly three weeks on charges of disturbing public order. They had planned to distribute stickers calling for action against sexual harassment. Beijing police told Associated Press that they too had no information on the cases.

In the UK, a Foreign Office spokesperson expressed deep concern about the detentions and said: “We are particularly concerned by reports that they have been denied due legal process, and at least one, Wu Rongrong, denied access to adequate medical care.

“We urge China to release all those detained for exercising their rights to freedom of expression, in line with China’s constitution and international human rights commitments.”

Wu has hepatitis B and spent the month before her arrest in hospital, but was reportedly denied medication for more than a week prior to her transfer to the detention centre’s medical facility. Her former lawyer Wang Fei said she was experiencing pain in the liver area and had blood in her phlegm.

Before her transfer, she told Wang that she had been forced to sleep on a concrete floor and denied regular medication by authorities who said her condition did not require treatment.

The US-based group Human Rights in China said another activist, Wang Man, was also in the medical centre after developing a heart condition following hours of interrogation.

While the past two years have seen a marked increase in detentions and convictions of activists and dissidents, there is particular shock at the decision to criminally detain the five. Several of them had a record of highlighting issues facing women in imaginative ways which seemed to be within the limits of official tolerance.

Sophie Richardson, China director at Human Rights Watch, said: “What they were planning to do was hand out leaflets and put out stickers on public transport to raise awareness of sexual harassment.

“They were not planning to mobilise hundreds or thousands of people, go to government offices [to protest] or even form a new NGO or political party or politically challenge the party or the government. They were essentially planning to carry out public education on a subject that does get addressed in the official media to some extent.

“It shows how allergic the government is to any kind of activity, outreach or encouragement of advocacy by any independent voices.” Meet the Chinese women standing up to inequality

If charged and convicted, Wu, Wang and the other three detainees – Wei Tingting, Zheng Churan, also known as “Datu” or “Big Rabbit”, and Li Tingting, better known as Li Maizi – could face up to three years in prison. Four others detained at the same time were released shortly afterwards.

Yan Xin, Li’s lawyer, said: “Their action does not constitute any violation of law, and the police are certainly wrong in detaining them.”

On Friday, the US ambassador to the UN, Samantha Power, said the charge of “creating a disturbance” was a pretext for stifling their attempts to tackle pressing social problems.

She said: “If China is committed to advancing the rights of women, then it should be working to address the issues raised by these women’s rights activists – not silencing them.”

The EU has also called for their release, saying it expected the Chinese authorities to let them go without delay.

Police raided the Beijing office of public health and social justice NGO Yirenping in the early hours of Tuesday, Human Rights Watch said. The detained women had supported or worked with the group and authorities have sharply increased scrutiny of non-profit groups recently.