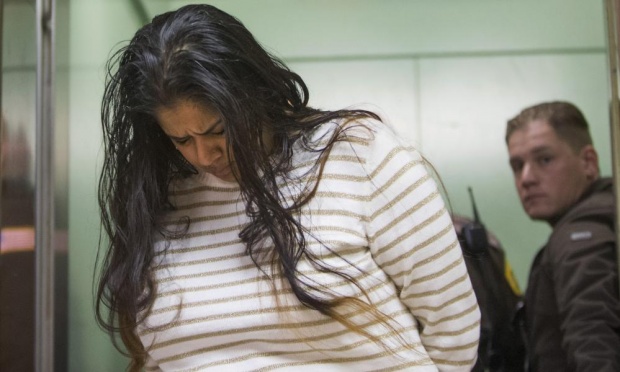 Abortion is illegal in the United States. So is having a stillbirth – not officially, perhaps, but thanks to a case in Indiana, we’re halfway there. On Monday, Purvi Patel, a 33 year old woman who says that she had a miscarriage, was sentenced to 20 years in prison for neglect of a dependent and feticide. She is the first woman in the United States to ever be sentenced for such a crime.

In July 2013, Patel went to the emergency room with heavy bleeding. She eventually admitted to miscarrying a stillborn fetus and placing it in a bag in a dumpster. (Patel lived with her religiously conservative parents who did not believe in premarital sex.) After police searched Patel’s cellphone, they found text messages that suggested she bought abortion-inducing drugs online.

Despite the fact that no traces of any abortifacent were found in Patel’s blood work taken at the hospital, the prosecution argued that she had taken the drugs mentioned in her text messages and caused her miscarriage at 23-24 weeks of pregnancy. And, in legal maneuvering that defies imagination, Patel was chargednot just with fetal homicide, but with neglecting a child. As the Guardian reported last year, these charges are completely contradictory: neglecting a child means that you neglected a live child, and feticide means that the baby was born dead.

But logic has never been at the center of the draconian laws and arrest policies that target pregnant women: control is. As Lynn Paltrow, the executive director of the National Advocates for Pregnant Women, told me last year about laws aimed at drug-using pregnant women, this kind of prosecution “is about making pregnant women – from the time an egg is fertilized – subject to state surveillance, control and extreme punishment.”

And, as with other laws that hurt pregnant women, Indiana’s feticide law was not intended (explicitly, anyway) to be a policy that affected women: it was supposedly designed to target illegal abortion providers. But despite the anti-choice insistence that women are “victims” of abortion providers, the history of how similar laws are used show just how much it’s women – and women of color in particular – who are directly impacted by “fetal protection” policies.

After a feticide law was passed in Texas in 2003, for example, a local district attorney used the opportunity to send a letter to all doctors in her county that they were now legally required to report any pregnant women using drugs. Doctors complied, and and more than 50 women were reported and charged with crimes.

We may never know what really happened in Patel’s case. She has repeatedly said that she had a miscarriage which, if true, means that the state is sending a woman to jail for not having a healthy pregnancy outcome. But even if Patel did procure and take drugs to end her pregnancy, are we really prepared to send women to jail for decades if they have abortions? Even illegal ones?

When women are desperate to end their pregnancies, they will. The answer to this shouldn’t be punitive, but supportive: women need better access to education, affordable contraception and abortion without harassment or delay.

Patel’s case opens the door for any woman who expresses doubt about her pregnancy to be charged if she miscarries or has a stillbirth. It’s a terrifying thought, but one that is already impacting real women: the anti-choice movement is now sending women to jail for what happens during their pregnancies. So tell me again how abortion is totally legal. Or tell Purvi Patel.