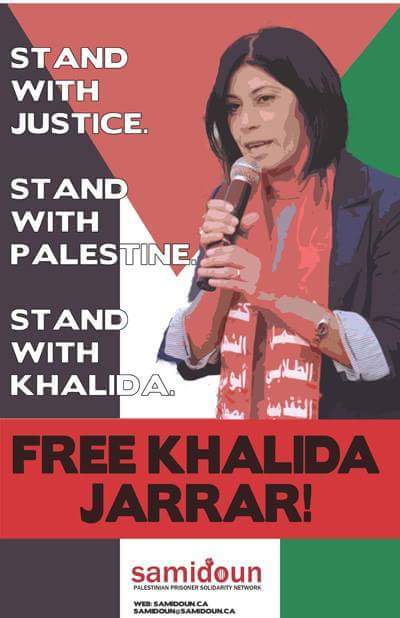 UPDATE, April 5, 2:30 pm: Khalida Jarrar, Palestinian leader, parliamentarian and feminist, has been issued a six-month administrative detention order imprisoning her without charge or trial, at the behest of the Israeli military commander in the West Bank, reported Addameer Prisoner Support and Human Rights Association – Jarrar’s lawyers – on April 5.

Mahmoud Hassan, lawyer with Addameer and director of its Legal Unit, reported that a military court session at Ofer will confirm the order on Wednesday, April 8, 2015. Jarrar is the former Executive Director of Addameer and Vice President of its Board of Directors, as well as the chair of the Palestinian Legislative Council Prisoners’ Committee and a member of the Palestinian national follow-up committee for the International Criminal Court.

UPDATE, April 5: Khalida Jarrar‘s first court hearing was rescheduled until tomorrow. Addameer Prisoner Support and Human Rights Association lawyer is on his way to Hasharon prison now to try to visit her. News via Yafa Jarrar.