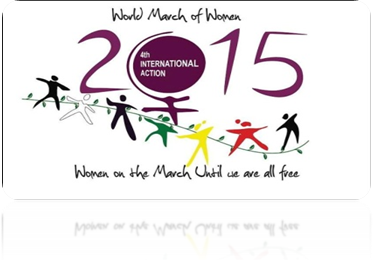 The World Social Forum was held in Tunisia from the 24th to the 28th of March. This convergence, meeting and alliance space, has historically been very important for the World March of Women because both have grown in parallel consolidation processes.

During these days, militants from countries as diverse as France, Brazil, Western Sahara, Tunisia, Ivory Coast, South Africa, Mozambique, United States, Palestine, etc. have come together to provide a feminist and anti-capitalist lens at the many processes that take place at the Forum.

In the Women’s Assembly, on the 24th, Graça Samo (Coordinator of the International Secretariat) reminded the more than 500 women who were there representing their organizations and movements, the importance of the feminist struggle for the defense of women’s rights. With hopeful words, our coordinator encouraged us to strengthen the links between our struggles, connecting local resistance, with the global struggles that sustain our movement.

Despite the intense rain, during the Opening March of the WSF, dozens of activists of the WMW grouped into a feminist block that sang, danced and banged their drums with great force. A drumbeat rang in slogans such as “solidarity with the women of the world!” and “against capitalism I resist, against patriarchy I rise”. Our banners, our songs and our energy caught the attention of the press, which devoted a good share of coverage of this event to the WMW, including an interview with Graça Samo on National TV.

During the following days, workshops organized by our different National Coordination Bodies and allies took place. The Tunisian Association of Democratic Women (CB Tunisia) played an active role in the coordination and preparation of the Forum and presented several workshops in which colleagues from other delegations had the opportunity to contribute, from the stage, and from panels of speakers on various topics that were discussed. Together we discussed the meaning of a more progressive approach to the rights of women, and reflected on the situation of women in conflict areas who see their most fundamental rights violated every day. We also discussed the need to have equality in order to achieve a decent system of well being, and the disastrous impact of the crisis on the socio-economic rights of women, which negatively impacts women the most, from cuts in public services, privatization of social services to job insecurity.

Grassroots Global Justice Alliance (our most recent National Coordination body) brought together more than sixty people at a workshop entitled “Feminist Unite, Take Action” for two hours that demonstrated respect for diversity and sisterhood, and conversations dominated by female voices, articulating the main aspects of our struggles and resistances around four areas: Violence against women, peace and demilitarization, economic autonomy and natural resources/climate justice.

Our Sahrawi sisters from UNMS (National Union of Saharawi Women) taught us about their struggle for self-determination and independence. The testimonies of Saharawi and Palestinian sisters living in both in camps and in the occupied areas, accompanied us during all activities of the WMW, to remind us that our marching can only stop when we are all free. Therefore, our last hours at the World Social Forum were spent on the streets of Tunis, showing our solidarity with our Palestinian sisters.

On the 26th we hosted the workshop: “The 4th International Action of WMW as an opportunity to strengthen the feminist movement against patriarchal capitalism”. Many dozens of curious people attended this meeting in which the five regional representatives shared their organizational experiences around the International Action of 2015. It became apparent, once again, that the union of our local struggles, strengthens us as a movement and empowers us as political subjects against the common enemy that oppresses us every day.

Beyond the workshops organized by WMW, the WSF always provides a great opportunity to build new alliances and strengthen existing ones. Our allies have stated their intention to support our struggle on key dates and join us on April 24th in shouting, “Rana Plaza is everywhere”. In different areas of convergence, such as the assembly of social movements, convergence on climate justice, and on land and water, and resistance against the power of transnational corporations, the WMW has worked with other movements in identifying commonalities in our struggles, in order to consolidate joint strategies of resistance. This firm intention by the WMW to consolidate its alliance with other movements has been sealed with a joint press conference together with La Via Campesina and Friends of the Earth International, in which we declared our intention to continue together, our resistance to the capitalist system that violates the rights of peasant communities, destroys and devastates the environment, and that attacks the body, life and mind of women.

We wrapped up the World Social Forum exhausted by all the energy expended over these last days, but also feeling proud and happy having connected with women around the world who are fighting the same enemies which make us feel stronger. Feeling that we have at our side, allies who support and invigorate us in our fight, and convinced that, although the road is long, the progress we make together is immense.