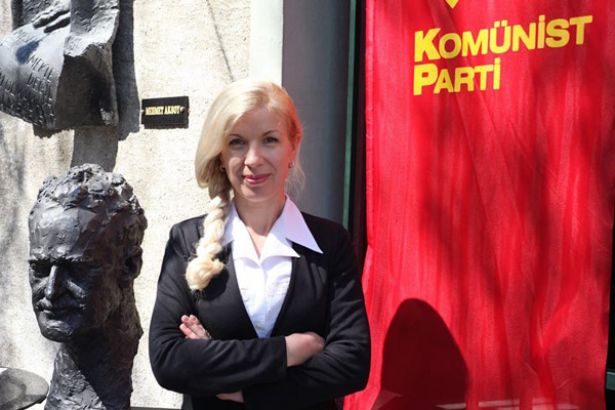 All 550 candidates of the Communist Party (CP), Turkey that will be running in the upcoming elections in June are women.

According to a recent statement released by the CP, the reason for choosing all women candidates is not simply about the active participation of women in the political struggle but because it is only women who can represent the rebellion against a social order that thrives on murdering and humiliating them on a daily basis.

The statement also noted that the women candidates of the party are the actual personification of the stance against the reactionary AKP (Justice and Development) regime. According to the CP, the active involvement of women in the social and politicalLIFE

can not be achieved simply by having a balanced representation of the “woman identity” in the bourgeois elections.

The fact that all the CP candidates are women has nothing to do with “identity politics” as some might be inclined to assume and has everything to do with making a statement to the whole society of Turkey that the liberation of working class women can only happen through women leading the struggle against not only women’s oppression but the overall system of exploitation itself.

a great example of how intervention in bourgeois elections can be a powerful tactic for revolutionaries in a country like Turkey, in a period when social, political and human rights of women have been under constant attack for the last 12 years at the hands of AKP.

In Turkey, in addition to attacks on reproductive rights, women’s social and political rights have generally been under assault through reactionary legislative changes in the constitution and judiciary as well as the destruction of the secular nature of the Republic of Turkey that at least on paper had guaranteed equality for women.

Here are a few examples of statements by AKP officials which illustrate the intensity and nature of women’s oppression during the AKP regime:

The President of Turkey, Tayyip Erdoğan broke new ground in bigotry and sexism as he elaborated on why he does not believe that men and women are equal. Speaking at a conference on women and justice (what an irony) in Istanbul in November 2014, he said: “Our religion [Islam] has defined a position for women: motherhood…Some people can understand this, while others can’t. You cannot explain this to feminists because they don’t accept the concept of motherhood.” He continued: “You cannot make women work in the sameJOBS

as men do, as in communist regimes. You cannot give them a shovel and tell them to do their work. This is against their delicate nature.” The President of Turkey seems to be deliberately confusing the notion of being physically equal and having equal social rights when it comes to men and women.

In another example, AKP deputy, Ayhan Sefer Üstün, who in a twist of irony happens to be the head of the Human Rights Commission of the parliament of Turkey, stated:”Abortion is a crime against humanity and the doctors who perform abortions are worse than rapists.”

Another outrageous statement was made by a writer in a pro-government newspaper who commented on the mass protests that were sparked by the rape and murder of a young woman and a university student, Özgecan Aslan, in February 2015: “If you, day and night, scream for sexual freedom, individualism,CAREERISM

and egoism, this is the end result.”

It is not a coincidence that violence against women has sky-rocketed during AKP rule, with a 1400 percent increase in the number of women murdered between the years 2003 and 2010 alone, the majority of them killed by their husbands.

Assault on women’s rights has an economic basis

According to a recent study by Özlem İlyas Tolunay, among all OECD (Organisation for Economic Co-operation and Development) countries, Turkey has has the lowest rate of female employment at 28.7 percent. According to the same study, around 11.9 million of the 27 million women in Turkey over the age of 15 are defined as “housewives.” Three million of the employed women are working in the agricultural sector, with women in both categories essentially working as “unpaid family workers”.

Representative of AKP’s reactionary ideology that sees women as nothing more than child bearing machines to be confined to home under the guardianship of their men, barred from higher education to be employed at service jobs as source of cheap labor at best, Erdoğan has repeatedly made public statements demanding that the women of Turkey should have at least three children. His views on abortion? “It is everyone’s duty to fight against abortion since it is a devious plan to wipe the Turkish Nation from the world.” In the neo-liberal capitalist paradise of AKP’s Turkey, the primary task of women is the reproduction of cheap male labor to be fed to the labor market for exploitation.

A CP, Turkey candidate on socialism

One of the CP candidates is Natalia Koyuncu (pictured above). Natialia was born in the Soviet Union in 1979. After marrying  her husband who is from Turkey, she moved there in 2007. An active member of the youth division of the Communist Party of the Soviet Union (CPSU) in her youth, she says: “I grew up and went to school in a socialist country. I have actually experienced socialism. The reason I am active in politics within the ranks of the CP is to re-establish socialism.” In an interview with a local media agency, when she was asked the question: “As you are talking to the people about socialism, you will certainly be challenged back by the statement ‘If socialism were such a good thing, it would not have collapsed. What will your response to that be?’” She replied:”If communism were not a good thing, why would the masters of the world try so hard to destroy it and make sure that it never comes back?”

Women of Turkey will continue to resist

The women of Turkey will not succumb to AKP’s oppression. They have been resisting and organizing. In recent years, there have been massive protests all over Turkey attended by thousands of women and men, denouncing the reactionary anti-women policies of AKP and the subsequent increase in violence against women. “Abortion is my decision, murder is your method,” and “AKP, get your hands and police off my body,” were two popular slogans used during these protests, exemplifying the nature of the resistance of women.

Subsequently, during the 2013 massive Gezi uprising that shook not only AKP government but the whole system to its core, women played a leading role. They were at the forefront of the resistance, they were at the barricades, valiantly standing firm against police’s tear gas, water cannons and pepper spray, fighting back. They did not succumb to AKP’s police terror. That is why the AKP government is extremely scared of women.That is why throughout their rule, women have in every sense of the word been under attack. Because AKP knows and fears that, the women, like the 550 CP members, who, in their struggle for women’s liberation, will also be leading the fight to uproot the whole system in which all forms of oppression, exploitation and injustices are rooted.