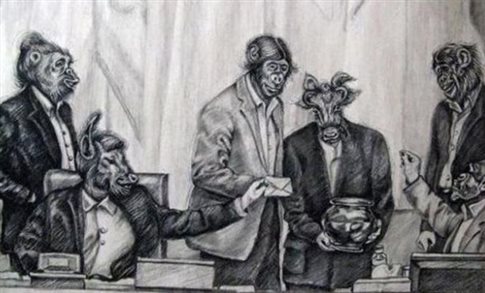 Atena Farghadani is a prisoner of conscience, sentenced to over 12 years in prison for her peaceful activism.

28-year-old Atena was tried on 19 May on charges including ‘spreading propaganda against the system’ and ‘insulting members of parliament through paintings’. She was sentenced to 12 years and nine months in prison.

Ahead of her trial, more than 33,000 of you signed our petition to the Iranian authorities calling for Atena’s release. We continue to call on Iran’s Supreme Leader and Head of the Judiciary to release Atenda immediately – she has committed no crime. The fight for her freedom continues.

Arrested for her art

Last August, 12 members of the Revolutionary Guards came to Atena’s house. They confiscated her personal belongings, blindfolded her and took her to Tehran’s notorious Evin Prison.  She was to be punished for her peaceful acts of political defiance, including meeting the families of political prisoners and for posting on Facebook a cartoon she’d drawn that was critical of members of the Iranian parliament.

Iran is currently creating a law that will roll back women’s rights in the country by restricting access to contraception and criminalising voluntary sterilisation. Atena’s cartoon, which depicted politicians in favour of this Bill, is now being held against her – one of the charges she has been convicted of is ‘insulting members of parliament through paintings’.

While in prison last year, Atena flattened paper cups to use them as a surface to paint on. When the prison guards realised what she had been doing, they confiscated her paintings and stopped giving her paper cups. When Atena found some cups in the bathroom, she smuggled them into her cell. Soon after, she was beaten by prison guards, when she refused to strip naked for a full body search. Atena says that they knew about her taking the cups because they hadINSTALLED

cameras in the toilet and bathroom facilities – cameras detainees had been told were not operating.

Beaten in detention, punished for speaking out

Atena was released in November last year, but rearrested just six weeks later. In the time that she was released, she gave media interviews and posted a video on youtube describing how the prison guards had interrogated her for nine hours every day for six weeks. She said that female prison guards had beaten her and subjected her to degrading body searches.

Just weeks after posting her youtube video, Atena was once again arrested – possibly as reprisal for speaking out.

Atena is a prisoner of conscience – she has committed no real

crime. She is being unfairly punished simply for exercising her right toFREE

Atena was kept in solitary confinement for over two weeks when she was detained last year in Tehran’s notorious Evin prison. During that time she was denied access to her lawyer or family. After her release from detention, she said that she’d been beaten by prison guards.

Three weeks after she was rearrested in January this year, Atena went on hunger strike to protest that she was being held in extremely poor prison conditions, in a jail that does not have a section for political prisoners. Atena’s health suffered considerably as a result; her lawyer told us that the 28-year-old had suffered a heart attack and briefly lost consciousness in late February as a result of her hunger strike.

Atena has since been moved to another detention centre and stopped her hunger strike, but we remain worried about her health.