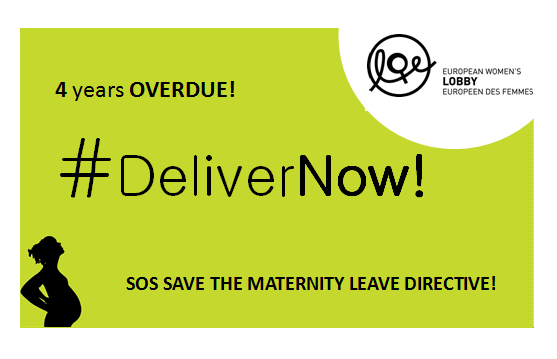 [Press release, Brussels 1 July 2015] While it may have been on the cards for some time, the actual official announcement today by Commission Vice-President Timmermans to withdraw the Maternity Leave Directive is one more sign that the European Union (EU) and the Member States are failing women across Europe.

The withdrawal of the Maternity Leave Directive is yet another example of a failure by the leadership of the EU to take positive action for women’s rights and gender equality in Europe. “It sends a very bad message to women and men in Europe about how much the EU can do to support working women and families in their everyday struggle for a decent work-life balance”, states Joanna Maycock, European Women’s Lobby (EWL) Secretary General.

The announcement comes a week after the launch of the second Gender Equality Index of the European Institute for Gender Equality (EIGE). This index shows that in the past 10 years, progress in achieving equality between women and men has stagnated across Europe and in some countries even regressed. Overall, women are still only halfway to equality and continue to earn 16% on average less than men. It is often at the moment of childbirth that the gender pay gap begins, with life- long often irreversible consequences, including a 39% pension gap and higher levels of poverty as women age. Despite existing laws that protect pregnant workers, the EWL sees that more and more women today are experiencing discrimination in the work place as a direct result of pregnancy and parenthood.

Clearly, the withdrawal of the Maternity Leave Directive from the legislative process also seriously undermines the democratic process of the European Parliament’s adopted position of 2010. Women make up more than half of the population and their rights are not red tape to be negotiated in a ‘better regulation’ scheme which deprioritizes their work, their salaries and fails to act to put a stop to the discrimination they face.

The EWL is worried about the replacement of the Maternity Leave Directive today with a Roadmap as it carries the risk of diluting women’s rights and equality between women and men through a soft law approach. The EWL and its members continue to call for stringent legislative measures grouped in an ambitious new EU Strategy for Equality between women and men post 2015. Equality between Women and Men is a founding value of the EU and yet progress has stagnated. A new strategy should set out clear, accountable commitments for EU action to address this persisting inequality and connected to the new global post-2015 framework – the sustainable development goals.

EWL’s campaign #DeliverNow that has been running since October last year has pushed for the strengthening of women’s rights, their protection during pregnancy and their return to work through a full paid statutory rights to maternity leave, as well as paid paternity leave. “The time is now!”, states Ms Maycock, “the European Commission and the Member States must take action to show their commitment to invest in women’s rights in Europe, if gender equality is to become a reality for all women and men in Europe”.

The EWL is the largest umbrella organisation of women’s associations in the European Union working to promote women’s rights and equality between women and men. EWL membership extends to organisations in all 28 EU member states and three candidate countries, as well as to 21 European-wide bodies, representing a total of more than 2000 organisations. www.womenlobby.org

The proposed Maternity Leave Directive, adopted democratically by a large majority of the European Parliament in first reading on 20 October 2010, has been blocked by Member State governments (Council) for over three years despite ongoing attempts to find a negotiated position and subsequent decision which never materialised.

The proposed Maternity Leave Directive is an all-encompassing set of proposals to strengthen the rights of pregnant workers and women returning to work following childbirth and/or who are breastfeeding. These include, up to 20 weeks fully paid leave, a mandatory six-week rest period before or after birth whenever they choose, extension of the same rights to domestic workers and adoptive mothers, specific measures for multiple births and disabilities, protection from dismissal for six months, protection from imposed night shifts and overtime and flexibility for breastfeeding mothers. In addition, a two-week fully paid paternity leave provision is included in the European Parliament’s adopted position, which bridges the gap in relation to paternity leave (also available to same sex couples) as there is no European Directive on this form of leave. It should also be noted that a passerelle clause is included for countries where a strong parental leave framework is in place, which means that the reality of the situation in different countries is taken into account and that women who are pregnant, have given birth and/or who are breastfeeding have the same rights throughout the European Union.

The proposal to withdraw the proposed Maternity Leave Directive, as a gesture of ‘legislative management’ was included in the Regulatory Fitness and Performance Programme (REFIT) in 2014. Despite all efforts to find a compromise including with the European Parliament and the Council, the Commission will withdraw the Maternity Leave Directive at the end of July and replace it with a general Roadmap.