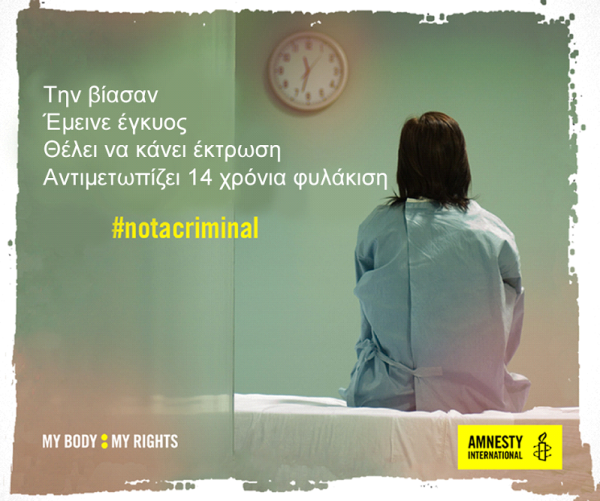 She’s pregnant. Doctors say the foetus won’t survive. But Irish law says she has to carry the pregnancy to term.

She was raped. Now she’s pregnant. And each day that the pregnancy continues reminds her of the horror she went through. Still, Irish law says she has to carry on.

She needs an abortion, but she is not allowed one in Ireland. Instead, she is forced to leave the country – if she can travel.  If she stays and tries to have an abortion in Ireland, she is threatened with a 14-year jail term.

She is not a criminal. She has a human right to an abortion.

Ireland has one of the most restrictive abortion laws in the world. This is underpinned by its Constitution, which protects prenatal life on an equal footing with the life of the woman.

Ireland only allows women and girls access to abortion if their life is at risk. In all other cases, abortion is a crime punishable by up to 14 years in prison.

Healthcare providers are stopped from giving out full information on abortion, for fear of being accused of “promoting” or “advocating” it – a crime that carries a fine of up to €4,000.

By denying women and girls abortions in cases of rape, incest, risk to health or severe and fatal foetal impairment, Ireland is violating their human rights.

About 4, 000 women and girls are forced to leave Ireland each year to access abortion services in other countries.  Some risk their health by not being able to get abortions in Ireland, and all are made to feel ashamed and like criminals for doing this.

Taoiseach, you can act to make sure Ireland stops treating women and girls like criminals.

I urge you to: