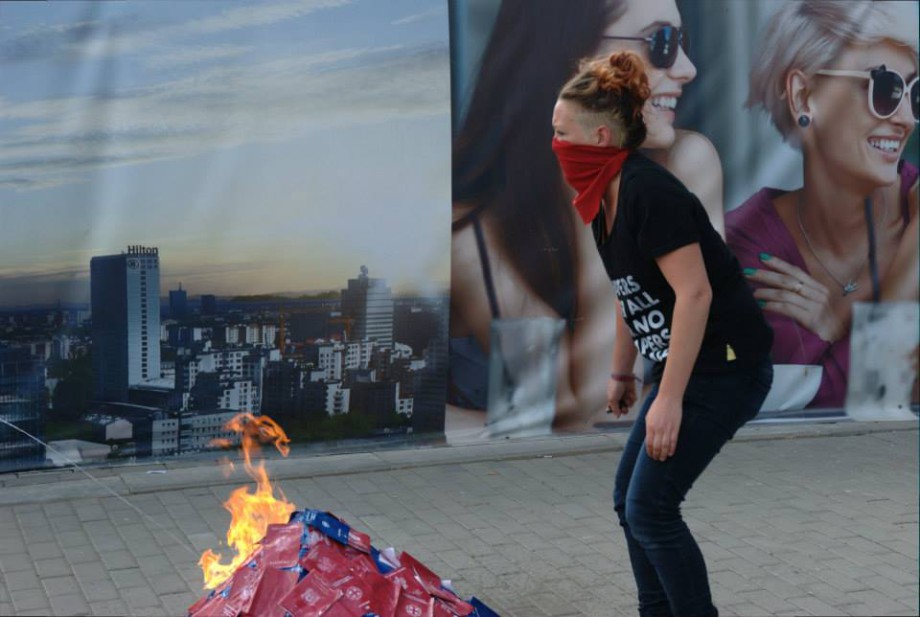 This Tuesday June 30th, in the wake of a summit in Brussels during which European leaders debated the fates of thousands of migrants attempting to reach European soil, six activists from the feminist anti-capitalist collective LilithS travelled to the Warsaw headquarters of Frontex– the powerful meta-organization responsible for coordinating the defense of Fortress Europe– whereupon they set fire to a pile of passports. Two of the activists, dressed in military apparel and wearing the blue armbands that identify Frontex agents, threw their passports, costumes, and armbands in the burning pyre while other activists were burning the frontex flags. The women donned t-shirts bearing the following slogans : NO BORDERS NO NATIONS, PAPERS FOR ALL OR NO PAPERS AT ALL, PEOPLE NOT PASSPORTS, NO ONE IS ILLEGAL. The LilithS proceeded to dance around the fire like witches possessed.

The politico-magical action undertaken by the LilithS is nothing short of an attempt to break the evil spells that have cursed Europe since its inception : racism, repression, and an insatiable hunger for profit. The pillaging economics of neocolonialism, the conflicts fueled by arms merchants, the human-made environmental disasters, and let us not forget the imperialist occupations– these must all come to an end. These are the factors that compel destitute, frightened, starving men, women and children to flee their homelands to ensure their survival and that of their loved ones.

Let us not turn a blind eye or forget that European governments share the burden of responsibility for these exoduses; their actions and policies are often at the origin of these forced migratory movements.

No longer will lifeless corpses wash up on the sands of Europe. The privileged white man will be made aware that the hundreds of millions of euros invested in creating an army of Frontexterminators would be better spent on humane policies and open borders– a small step towards repaying the moral and economic debt incurred over centuries of pillaging and colonialism.

No longer will Frontex take part in violent maritime interventions, nor will it cooperate with organized crime in Morocco and Libya. There will be no more drowning deaths off the coast of Italy, no more assaults on Ceuta and Melilla, no more corpses entangled in barbed wire on the Bulgarian border or strewn across minefields in Evros. There will be no more innocents locked in inhumane detention centers, or drugged and shackled on planes that leave in the night. The violations of international human rights will cease. Never more will a person be abandoned in the desert or at sea. The horror will come to an end, at last.

We call upon the spirits to break this curse once and for all, and should it attempt to return from the dark abyss, then as many pyres will be lit across Europe as are necessary to drive this evil out. We will burn the tools of classification and oppression, we will burn Frontex, and we will dance on the ashes. And in their place will flower solidarity and mutual aid, brotherhood and sisterhood.

With love and magic,