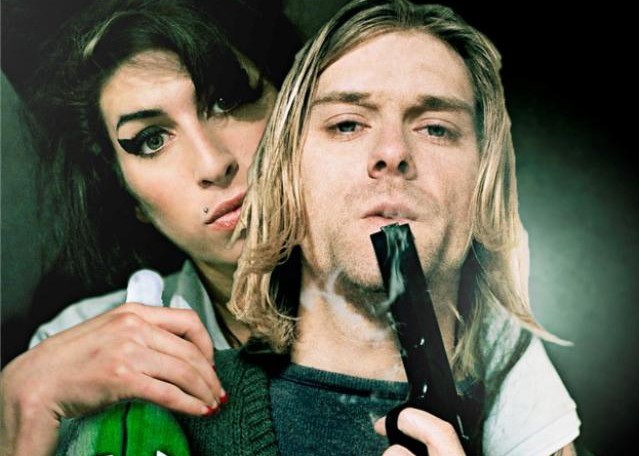 In the same season we’ve been presented with two different comprehensive documentaries of two of our most iconic and tragic, gone-too-soon figures in recent decades. Brett Morgan’s Montage of Heck depicts the slow unraveling of Kurt Cobain in the preamble to his suicide, Asif Kapadia’s Amydepicts a corollary narrative about Amy Winehouse’s life, and in the process sheds light on how unequal the treatment of male and female artists truly is, even in death.

The two artists faced radically different cultural realities: Cobain’s death happened in the pre-TMZ era when the world wide web was in its infancy, and Winehouse rose to fame in the age of internet ubiquity. Still, the assumptions that belie public perception of each artist’s tragedy– as seen through the two documentaries, which excerpt raw media as evidence– obviate the unfortunate iniquities that now come as no surprise.

In the course of Amy, a newscaster reports on Winehouse’s infamous meltdown in Serbia by commenting that “she had the chance to make a big comeback and she totally BLEW it!” while laughing through a segment that dovetails with George Lopez announcing that Winehouse had won a Grammy by saying, “someone call and wake her up at 6 PM and let her know” before calling her “a drunk” with a derisive scoff. A slurry of ugly tabloid images fly across the screen and we see paparazzi preying upon her existential nadir– meanwhile, Montage of Heck posits a cache of neat magazine covers that offer obsequious, reverential coverage of a man whose drug addiction was portrayed as incidental to his supreme talent. Even though both deaths were motivated by depression underscored by narcotics and celebrity, Montage depicts a context in which the public was willing Cobain to succeed, whereas Winehouse, when confronted with similar drug-addled obstacles, was met with ridicule and slander. If Amy proves anything about the life and times of Winehouse, it’s that newscasters, tabloids, and even respected media outlets reported on her shortcomings with enough thinly-veiled aggression to weaken what little resolve the drugs hadn’t already sapped. Cobain’s struggle with drugs, meanwhile, was all but an open secret while he was alive, whispered about or written around in order to maintain good graces and access to the superstar and his band.

The unequal treatment here is not new.

The way media dotes over its tortured male artists while undermining the personal struggles of women who suffer the same is nuanced, but a look into the archive suggests the phenomenon is well documented across race, genre, and generation. When Janis Joplin died on October 4, 1970 the New York Times called her a “misfit” whose “behavior was explosive” and remembers her as “drinking from a bottle at her concerts” and “screaming obscenities at a policeman in the audience”. Two weeks prior when Jimi Hendrix died– also at the age of 27– the same paper’sheadline referred to him as a “Top of Music World Flamboyant Performer Noted for Sensuous Style” above an article that failed to highlight his fabled and widely-acknowledged affinity for mixing drugs with alcohol, even as new evidence emerged that he was wildly out of control during his final days. In many cases these kind of comparisons are sticky because Joplin was not Hendrix in the same way that Billie Holiday was not Keith Moon, and there are so many other factors affecting the way we remember these icons that it seems silly to compare them on the basis of their self-destruction alone– but how we interpret an artist’s demise says a lot about how we view them in life.

The pattern is always the same: one Billie Holiday obituary dedicated an entire column to discussing her 1947 arrest and narcotics conviction; years later a Keith Moon obituary mentionedonly that “his death comes at a time when he seemed to have recovered from the excesses of earlier years”, without so much as mentioning that those “excesses” included a well-documented struggle with alcoholism and the 32 clomethiazole pills that ultimately killed him. Whitney Houston, like Amy Winehouse, was depicted as a substance-addled mess in the run up to her overdose death, much unlike the courtesy that was lavished unto Michael Jackson, whose latter-day prescription drug habit was neatly and often dismissively attributed to the rueful loneliness of fame, if it was even reported at all.

Even when public meltdowns or existential tumult doesn’t result in death, the media’s depiction of female artists still tends toward collusion. When Lauryn Hill took a sabbatical from music because she objected to the way the industry commodified her lifestyle– a choice that dovetailed with a concurrent broadcast of religious faith– she was depicted as a crazy person. When Nas, Mase, Yasiin Bey and even to a lesser extent, Kendrick Lamar all did the same, they were heralded as noble, bravely pious. The reportage was damaging and unequal: when Hill left the country it wasportrayed as exile; when Mos Def left the country it was to become Black Dante.

The way pop culture suggests an aversion to Courtney Love’s drug-addled mythology while espousing Cobain’s martyrdom, the way some communities shit on Lana Del Rey’s “aesthetic sadness” while simultaneously espousing emo bands fronted by men– it’s not to say that any of these genres, digressions, or affinities necessarily deserve respect, but there is a schism and a definite, unfair gender binary that favors troubled men over troubled women–and their right to be troubled. Men who grapple with issues that coincide with art and fame are canonized in death; women who do the same are made lesser, somehow, by their own unequivocal loss.

It’s very likely that the unfair portrayal of women stems from a puritanical notion of the “woman as artist”— this often unarticulated pedagogical idea that women, by their very baby-making capacity, are somehow never able to–and shouldn’t– immerse themselves as fully into art as men, because the question of gender gets in the way. Women are forever seen as outsiders, interlopers, their genius owed to the nearest male manager (The Runaways), producer-svengali (Ke$ha), famous boyfriend (Joni Mitchell) or husband (Alice Coltrane). This incredibly subtle “othering” of women, coupled with a culture-wide superficiality that places the onus of physical beauty more squarely on female celebrities than on men, sets female artists up for spectacle– the pernicious underbelly of gossip.

A friend of mine once told me about an art historian who lamented that fact that Yoko Ono would never be as widely-respected as several contemporary male artists because she was a mother. “Women who live art– who put their art first, above their families– are seen as selfish, neglectful parents,” the art historian had said. “Men who do the same are regarded as geniuses consumed by their work.”

Women who succeed in a big way upset convention, and we haven’t yet figured out how to deal with that as a culture. When women succeed as Winehouse did, we anticipate their downfall and pounce hard, relish the sillage of failure when we get a whiff. It’s coded into our public expectations of women even before this happens, from the recent takedown of Beyonce over her admittedly paltry diet announcement to the everyday thinkpiece about Madonna’s age (even as The Who, AC/DC, The Replacements, Bono, Bruce Springsteen, and hundreds of other male artists that are all older than her continue to tour without criticism). We martyr our women because we fear their greatness. We do so because we fear women who are living out of bounds.