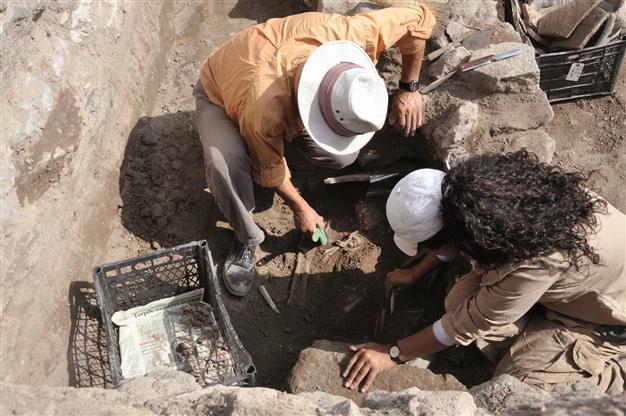 The Kültepe-Kaniş-Karum trade colony in the Central Anatolian province of Kayseri continues to amaze archeologists, with an expert at the dig revealing that tablets citing women’s rights were discovered at the Bronze Age settlement.

Excavations at the ancient tumulus site began in 1948. So far, it has been discovered the center was where the written history of Anatolia began and the largest monumental structure of the Middle East was unearthed in 2013. A centuries-old baby rattle and a tablet about the sale of a donkey were unearthed last year.

Last month, the 2015 excavation season began in Kültepe. The head of the excavation team, Prof. Fikri Kulakoğlu of Ankara University, told Doğan News Agency on July 16 the site was remarkable not only because the priceless tablets revealed commercial information about the Assyrians, but also about the local social life of the time with all kinds of personal details about individuals.

“From women’s rights to the adoption of children and marriages arranged at birth, the tablets include all kinds of civilizational and social data from Anatolia 4,000 years ago. There is also an emotional letter from a woman to her husband and a letter from another woman who complains about her mother-in-law. You can’t find such things in an empire’s official archive,” he said.

Still, most of the 23,500 cuneiform tablets unearthed at Kültepe were about commerce. “Kültepe is where the Anatolian enlightenment began. The people in this area were literate much earlier than other places in Anatolia, including its west,” Kulakoğlu added.

Some 90 percent of the Kültepe tablets can be seen in the Museum of Anatolian Civilizations in Ankara. Some of them are exhibited at the site and are expected to be transferred soon to a new archaeology museum under construction in Kayseri, deemed to be the most important museum of the historic Cappadocia region.

“This is a huge wealth,” Kulakoğlu said, voicing his hope that the trade colony will soon be included in the UNESCO World Heritage List.

One of the most important discoveries was a tablet from 2000 B.C., which explains there were local kingdoms in Anatolia at that time and the Kaniş Kingdom was the most powerful one.

Only a small area of Kültepe, which is thought to have hosted over 70,000 people four millennia ago, has been excavated so far. Officials say it might take 5,000 years to excavate the entire ancient site.