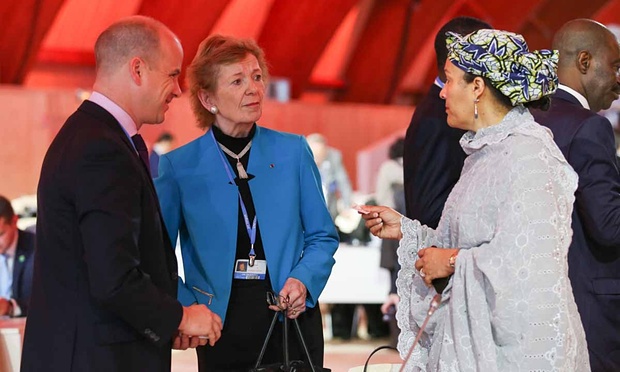 The climate change talks going on in Paris are too dominated by men, to the detriment of effective action on saving people from the ravages of global warming, the UN’s special envoy on climate change has said.

Mary Robinson, the former UN human rights chief and Ireland’s first female president, told the Guardian in an interview: “This is a very male world [at the conference]. When it is a male world, you have male priorities.”

She pointed to the line-up of ministers now leading the talks, few of whom are women. “If you don’t have women here, how can you say this is about people?”

Tuesday was officially designated as “gender day” at the fortnight-long talks, which began nine days ago.

At Paris, governments are meeting in the hope of signing a new global agreement on limiting greenhouse gas emissions, which would kick in from 2020 when current commitments expire. It is seen as the last chance for the UN negotiations, which have been carrying on since 1992.

“We have to humanise this, we need to send a strong message that this is about people. We need to have legal text on human rights and gender equality,” said Robinson. “Women in developing countries are among the most vulnerable to climate change.”

Of the talks, she said: “There is a tendency to think that this is not a place for women, and we have to resist that. I have heard women here saying they feel strange to be here. Women have to be here in large numbers, to have critical mass.”

She added: “Climate change is affecting the most vulnerable people around the world, and they are not the cause of it. This is at the heart of the future for all women, for all people.”

Some countries are understood to be opposed to including language on gender equality in the text, including middle eastern countries. The UK, US and EU have said they support the inclusion of such terms

Climate change, Robinson warned, would prove a “serious disruption to social order” if allowed to go unchecked. The mass migration of people afflicted by warming, which is likely to render swathes of the globe virtually uninhabitable if temperature rises continue, would have a huge impact.

“We are not handling migration well,” she said, referring to the crises provoked by the mass movement of people from Syria, north Africa and across the region, which she said would be worsened by climate change. “We need to change our whole approach to it.”

Robinson said that a climate deal in Paris, if struck, would not be the end of the story. More work would need to be done on ensuring regular reviews of countries’ commitments on emissions and on finance for the poorest nations, to help them cut emissions and cope with the effects of extreme weather. “I know we can’t get it all done in Paris.”

She said that climate change should not be seen in isolation, but alongside economic development for the world’s poor, which she hopes will be fostered by the UN’s sustainable development goals. “From the first of January 2016, I hope we will be starting a new era of sustainable development. It will not be perfect, but every country has to strive to get there.”

Robinson said that some women had been excluded from the talks, having failed to get the badge needed to enter the high-security compound. She was in touch with some of them, communicating the goings-on in the negotiations, she said.