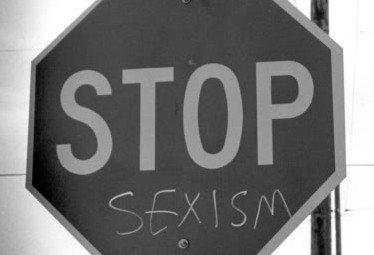 Sexism can be defined as “the supposition, belief or assertion that one sex is superior to the other, often expressed in the context of traditional stereotyping of social roles on the basis of sex, with resultant discrimination practiced against members of the supposedly inferior sex”. “Sexist hate speech” as a legal term does not yet exist, but legal documents support its inclusion. Sexist hate speech targeting women has been referred to in several terms such as “sexualised hate speech”, “sexist hate speech”, “cyber gender harassment”, or “cybersexism”. The aims are to humiliate and objectify women, to destroy their reputation and to make them vulnerable and fearful. It is a form of social shaming, spreading the message that the woman is not a full human being. Gender motivated hate speech creates, reinforces and perpetuates gender hierarchy in public places, destroys equality, solidarity and inclusion in all communities and increases gender-based violence (against women and LGBTQI). As gender discrimination, sexist hate speech “has a set of core features: (1) its victims are female [men are less targeted], (2) the harassment is aimed at particular women, and (3) the abuse involves the targeted individual’s gender in sexually threatening and degrading ways”.

Provisions against hate speech in international human rights law usually cover grounds related to racial, ethnic and religious hatred, as is the case in the International Covenant on Civil and Political Rights. At European level, hate speech, as defined by the Council of Europe, covers all forms of expression which spread, incite, promote or justify racial hatred, xenophobia, anti-Semitism or other forms of hatred based on intolerance, including intolerance expressed by aggressive nationalism and ethnocentrism, discrimination and hostility against minorities, migrants and people of immigrant origin. Although the definition refers to a number of groups which are frequently seen to be the targets of hate speech, the list should be read as open-ended, and not limiting the possible targets to these groups alone. The explicit inclusion of sexism in the Council of Europe’s definition of hate speech, as well as at national level, would send a strong message, raise awareness about this increasingly common phenomenon and encourage affected women and girls to report it and combat it. Ιn 2011 the Council of Europe opened for signature the Convention on preventing and combating violence against women and domestic violence (the Istanbul Convention). Five years after its opening for signature, the Istanbul Convention has been ratified by only 20 of 47 member states (Albania, Andorra, Austria, Bosnia and Herzegovina, Denmark, Finland, France, Italy, Malta, Monaco, Montenegro, Netherlands, Poland, Portugal, San Marino, Serbia, Slovenia, Spain, Sweden and Turkey), and not by Greece.

The Convention provides that “Parties shall take the necessary measures to promote changes in the social and cultural patterns of behaviour of women and men with a view to eradicating prejudices, customs, traditions and all other practices which are based on the idea of the inferiority of women or on stereotyped roles for women and men”. This is an important provision, as practices based on the idea of the inferiority of women are at the core of sexism, which can take the form of sexist hate speech. Furthermore, the Istanbul Convention includes types of violence against women that can also represent forms of sexist hate speech:

1) Sexual harassment: The Convention binds state parties to prohibit sexual harassment, including “verbal, non-verbal or physical conduct of a sexual nature unwanted by the victim with the purpose or effect of violating the dignity of a person, in particular when creating an intimidating, hostile, degrading, humiliating or offensive environment.”

2) Stalking: The Convention also binds state parties to prohibit stalking: “Parties shall take the necessary legislative or other measures to ensure that the intentional conduct of repeatedly engaging in threatening conduct directed at another person, causing her or him to fear for her or his safety, is criminalised.”

The Convention also highlights the participation of the private sector and the media and establishes the obligation of state parties to find ways to encourage private companies and the media to set themselves self-regulatory standards, for example to limit any form of verbal or physical abuse of women. This would include hate speech on the grounds of gender, as well as any incitement to violence against women. The obligation on the government here is to set incentives or otherwise encourage the private sector actors to do whatever they can to make sure none of their products, services or advertisements exhibit misogynistic tendencies or gives them a platform to develop.

In January 2016, the Council of Europe published a paper on “Encouraging the participation of the private sector and the media in the prevention of violence against women”. The paper refers to the importance of providing guidance and tools to avoid sexist and stereotypical language, as well as of having clear policy frameworks and complaint mechanisms to ensure the withdrawal of sexist and harmful content in the media. An additional standard are guidelines adopted in 2013 by the Committee of Ministers of the Council of Europe on gender equality and media. They specifically recommend that “unless already in place, member states should adopt an appropriate legal framework intended to ensure that there is respect for the principle of human dignity and the prohibition of all discrimination on grounds of sex, as well as of incitement to hatred and to any form of gender-based violence within the media.” In addition, the importance of non-sexist language has been addressed by the Council of Europe’s Committee of Ministers. The Recommendation on the Elimination of Sexism from Language confirmed the “fundamental role of language in forming an individual, and the interaction which exists between language and social attitudes”.

Hate speech targetting women is often neglected, for it is so much present in every day life and it can be so subtle that people do not even recognise it. This is why it is even more dangerous. We need:

* To raise awareness about the extent of the problem through statistics, figures and personal stories,

* To speak up for gender equality and Human Rights of women in all fields of life by giving positive examples of counter narratives;

* To reach out to men inviting them to speak up for equal rights and express solidarity and support to women, (addressing citizens and men’s groups, clarifying to focus sexist hate speech targeting women);