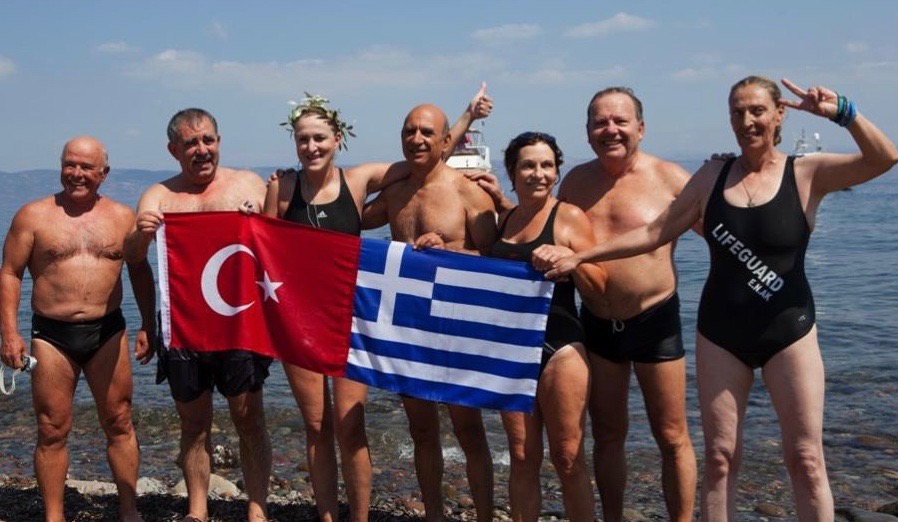 In a symbolic gesture of Turkish-Greek friendship, Turkish long-distance swimmer Seda Kansuk swam the 11 kilometer distance between the coast of Turkey and Eftalou on the Greek island of Lesvos; a popular route used by migrants fleeing conflict zones trying to reach the EU.

The swimming event took place on Sunday. Greece’s Coexistence citizens’ group helped organize the 45-year-old’s swim, while many of the organization’s volunteers participated in the final 150 meters.

According to the UN Refugee Agency (UNHCR), as of August 21 92,881 migrants have arrived on Lesvos from the Turkish coast in 2016 alone.

The amount of migrants arriving in Greece trying to flee their countries and enter into the EU had decreased under the EU-Turkey migrant deal struck in March which states that migrants rejected for asylum can be sent back to Turkey, but recent days has seen instability in Turkey following a failed military coup and the agreement with the EU is fragile.

Of the migrants that have entered Greece so far this year 48 percent are from Syria, 25 percent from Afghanistan, 15 percent from Iraq, 4 percent from Pakistan and 3 percent from Iran and an additional 4 percent is from other countries, according to UNHCR data.
– See more at: http://greece.greekreporter.com/2016/08/23/turkish-swimmer-makes-11km-swim-from-turkey-to-lesvos-as-symbolic-gesture/#sthash.9bVHmc1r.dpuf