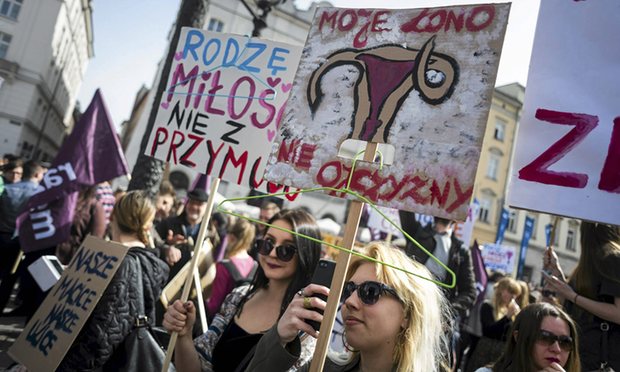 A protest in Kraków in April 2016 against plans to tighten the law on abortion in Poland. Photograph: Łukasz Kamiński/Agencja Gazeta/Reuters

European Women’s Lobby in solidarity with women in Poland!

Women organisations in Poland and Europe are reacting strongly against the decision taken by the Polish Parliament on 23th of September to move ahead with the bill which would introduce a near-total ban on abortion. Furthermore, the Polish Parliament decided –without any further discussion- to reject the bid proposed by women’s rights organisations to liberalise the existing law on abortion which is already one of the most restrictive in Europe. The Polish Parliament seems to be completely ignoring voices of women’s rights organization in Poland and abroad who are raising to defend their basic human rights to take decisions over their own lives.

The European Women’s Lobby (EWL) is deeply concerned as the health and freedom of women living in Poland could be even more threatened by this bill. If adopted, it would constrain women´s right to early termination of pregnancy to only one assumption: if the life of a woman is at risk and it is necessary to save her. In June this year, the EWL sent a letter to the Polish Government calling for Poland’s obligation to protect human rights and asking Polish decision-makers to listen to the demands of women’s rights organisations.

Women rights organisations in Poland and Europe are rising!

Women and men in Poland and abroad are protesting against this decision and the proposed legislation. 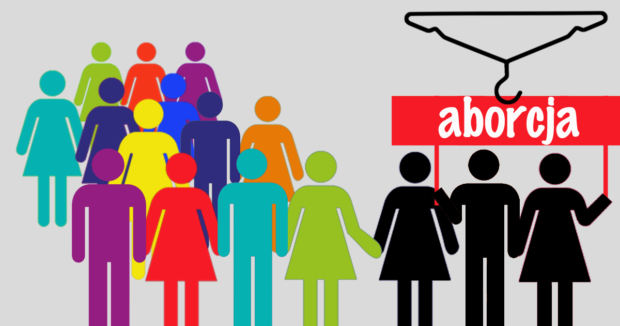 This coming weekend (1 and 2 October 2016), marches and protests, so-called “Black protests”, will be taking place in different cities all over the country. Thousands of people wearing black clothes will be voicing their anger and calling the Government to put an end to torturing women.

Women in Poland are called to go on a national strike on Monday 3 October to show their disagreement with the proposed law by rejecting to do any paid or unpaid work.

How can you get involved and react?

• Sign this open letter in solidarity with women in Poland and to support women grassroots movements by helping them to fundraise. This is a We move Europe initiative in partnership with the European Women’s Lobby.
• Write a letter to the Polish Embassy in your country calling for Poland’s obligation to protect human rights and asking Polish decision-makers to listen to the demands of women’s rights organisations.
• Join the social media actions posting pictures in black clothes, hashtag #czarnyprotest (black protest) so that the protest becomes even more viral. Use also the hashtag: #ODZYSKACWYBOR, to show solidarity with women in Poland.
• Share on social media the EWL visuals calling on several decision makers in Poland and at EU to react and ensure women’s human rights (find them at the bottom of this site).

The bill accepted by the Polish Parliament will threaten even more the health and freedom of women living in Poland!

Let’s not forget that the current Polish abortion law is already extremely restrictive. It allows women to terminate pregnancy only in three drastic situations: when women’s life and/or health are threatened, when the pregnancy is the result of criminal offence (rape or incest), or when the foetus is severely malformed. 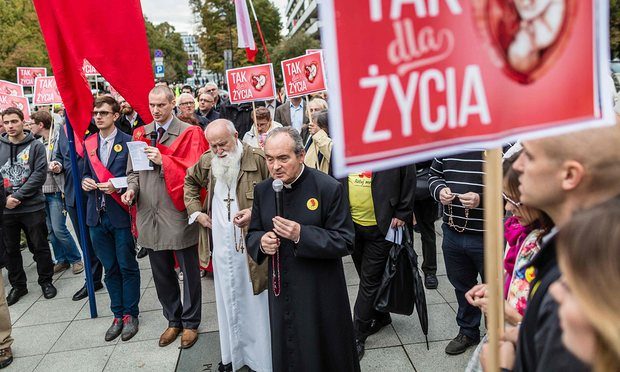 An anti-abortion demonstration in front of the Polish parliament in Warsaw. Photograph: Wojtek Radwański/AFP/Getty Images – September 2016

The situation will become even worse should the extreme conservative bill be finally adopted. It will mean almost a complete ban on abortion: women survivors of rape will be forced to face the trauma of giving birth and women who discover that their foetus have no chance to survive the pregnancy will be forced to live with the misery of going on with the pregnancy for months.

The proposal would also increase the maximum prison sentence from two years to five health professionals who help to perform abortions. Several forms of prenatal testing, which are basic prevention measures for maternal health, are connected to small risks of miscarriage. In such case doctors would have to face the possibility of criminal charges. While doctors around the world are conducting complicated procedures on foetuses to help save the pregnancy and, in the end, ensure birth of a healthy baby, Polish doctors will face an impossible choice. They will either help the woman and risk their whole life and career, or they will simply refuse to conduct necessary procedures putting their patient at risk.

Furthermore, the current bill tabled also indicates that women who have terminations could be jailed for between three months and five years. Judges would have the discretion to waive custodial sentences for individual women found to have terminated their pregnancy. Imagine a situation of a woman who have been trying to get pregnant for a very long time and then after traumatic miscarriage can be interrogated like a criminal to make sure that it was “unintentional”.

It is also worth to notice that, on the very same day, the Polish Parliament also approved moving ahead with a bill on in-vitro fertilisation (IVF) that will only allow women to fertilise one egg at a time, thus considerably reducing the chances of a successful pregnancy. Furthermore, it would make it illegal to freeze embryos, which its proponents say are human beings from the moment of fertilisation.

The bill to liberalise abortion proposed by women’s rights organisations was rejected by the Polish Parliament without any further debate.

The bill proposed by “Save Women” was calling to allow abortion on request in the first 12 weeks of a pregnancy, increase access to contraception and sex education, and preserve existing exceptions for foetal anomalies until the 24th week, and for rape or sexual abuse until the 18th week.