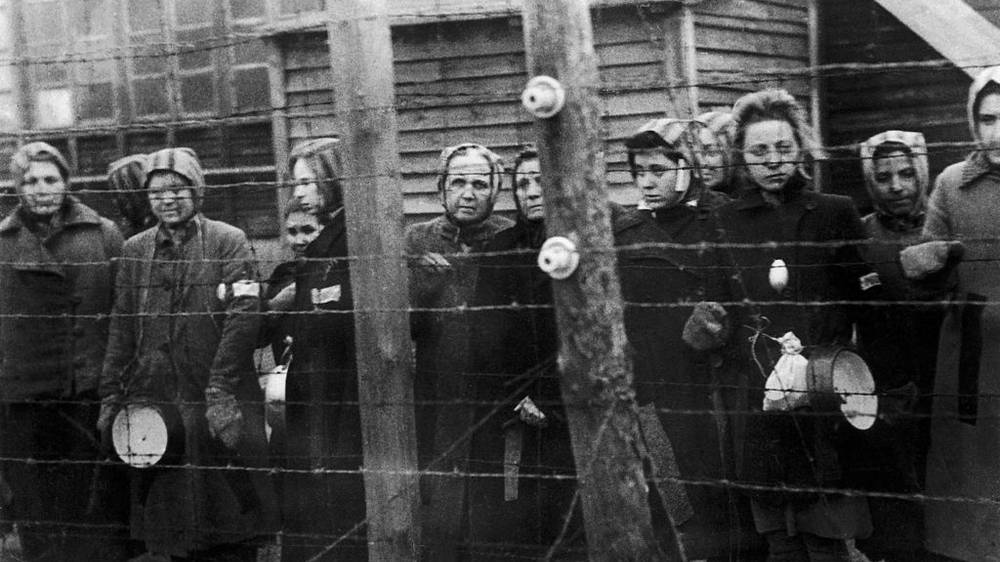 In 1946, a group of female guards stood trial for war crimes committed at an all-women concentration camp. Seventy years on, why does Ravensbrück remain a footnote in history?

Seventy-years ago on December 5, 1946, the Hamburg Ravensbrück war crimes trials began in Germany. Fifty-six miles north of Berlin and opened in 1939, Ravensbrück was the largest and most notorious of Nazi camps for women. Of the sixteen people on the stand that day, seven were female. Among them was 26-year-old Dorothea Binz, who, despite her gender, had risen to the rank of Assistant Chief warden or Oberaufseherin. Binz’s crimes included shooting, whipping and setting dogs on prisoners. By the end of the trials in July 1948, 21 out of the 38 individuals charged were women.

The story of Ravensbrück reveals uncomfortable, under-acknowledged truths about the role of women in the Third Reich. Ravensbrück is distinctive for being the key training facility for thousands of Nazi female guards, known as Aufseherinnen. Once trained in the art of brutality—from learning the in’s and out’s of verbal and psychological abuse, right up to beatings and whipping—these women were deployed to camps across the Reich. The infamous Irma Grese for example, nicknamed the Hyena of Auschwitz, began her career in Ravensbrück in 1942. The camp was also exceptional for being run almost completely by Aufseherinnen, whose management was overseen by Dorothea Binz.

“We’re talking about a really patriarchal society, from the time in general and from the Nazi regime. We have to remember that,” Dr Rochelle G. Saidel tells me over the phone. She is the executive director of the Remember the Women Institute in New York and author of The Jewish Women of Ravensbrück Concentration Camp. “People say ‘SS guards’ but women couldn’t belong to the SS; they were auxiliary. The SS was for men. Many of those women were very brutal… They were often from a lower to middle class background. [Being guards]gave them some status and they liked the status.”

When Ravensbrück opened, it was relatively hospitable in comparison with its counterparts. The German communist Margarete Buber-Neumann, who came to the camp after spending time in a Russian gulag, said of her first impressions of Ravensbrück, “This is a concentration camp?” But as the war progressed conditions began to swiftly deteriorate. The camp became dangerously overcrowded. Disease and malnutrition flourished. To meet the ever-increasing demands of the German war effort, prisoners were forced to work harder for longer in arduous conditions under pain of death. 74 Polish prisoners, referred to as the Ravensbrück “rabbits,” underwent torturous medical experiments at the hands of camp doctors. 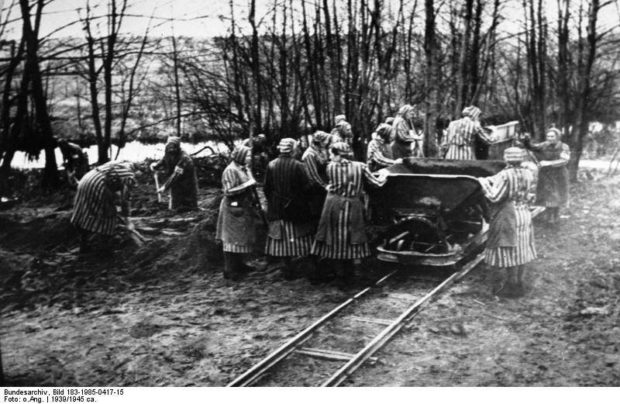 Over the course of World War Two, over 130,000 prisoners passed through the camp, among them members of the resistance, Communists, academics, members of the Romani community and others who did not conform to Nazi ideals of femininity. Some women came with their children, others gave birth in the camp. Prisoner nationalities spanned all German-occupied Europe: Russian, French, German, and Dutch, with the largest contingent coming from Poland. Twenty-six-thousand of the inmates who spent time in Ravensbrück were estimated to be Jewish.

“Conditions were not good for any of the women but from what I have studied, the conditions were worse for the Jewish women. They were treated more harshly, their living conditions were worse,” Dr Saidel tells me. Between 1942 and 1943, Jewish prisoners were removed from Ravensbrück, with many sent to Auschwitz and others to the gas chamber in nearby Bernberg. 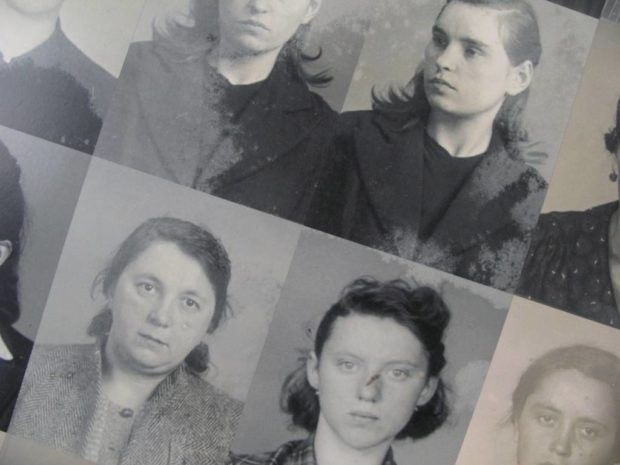 Jewish political prisoners faced specific punishment, Dr Saidel explains. “If you were a political prisoner and not Jewish, you had a much better chance of surviving until the end. The Jewish women who were political prisoners, either social democrats or communists, they murdered them. Arrest orders had different columns; one for ‘political prisoner’ and so on. There was also a column for ‘Jewish.’ These women had both columns checked off.”

In her research, Dr Saidel has spoken with survivors of Ravensbrück and their relatives. She tells me the incredible story of Gemma La Guardia Gluck, sister of Fiorello La Guardia, the celebrated mayor of New York. Gluck, an American-born Jew who married a Hungarian, was living in Budapest when the Nazis invaded. She was incarcerated in Ravensbrück at the age of sixty-five but managed to survive. Upon her release, she discovered one of her daughters and her baby had been in the camp at the same time, in solitary confinement.

“Gemma wrote in her memoir, “I gave one look at that baby and I thought, ‘Where will I be able to bury him?’ He was a year old and not in very good shape,” Dr Saidel says. “But after the war, Gemma and her family survived in Berlin. By then Fiorello was head of the refugee relief efforts in the United States. He had no idea where she was during this whole time. She was eventually able to call him. He was tough, not breaking any rules even though she was his sister. The law then was that when you married, you went by your husband’s nationality.” In time, Gluck and her family would make their way to a new life in New York.

“Women are perceived as caring, nurturing, mother-like figures for obvious reasons—how do you square that with the reality of the Holocaust?” Daniel Patrick Brown asks as we discuss what happened at Ravensbrück. He is the author of The Camp Women, one of the first studies into the role of women in the Third Reich. “I always come back to the fact that training and background have so much to do with how people act and react. The Nazis created a system whereby you were encouraged to be the most horrific human being imaginable. The training was all designed to get these women to be hard and to do what needed to be done. In many cases, it was very successful. Having said that, I think it’s a huge mistake to let people off the hook by saying, ‘Oh, I was trained to do that.'” 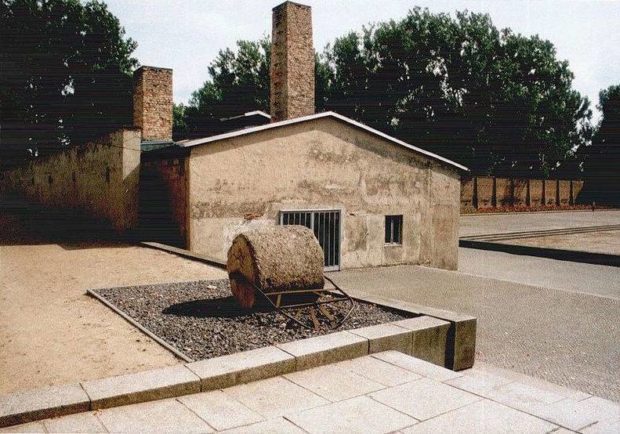 The crematorium at Ravensbrück in present day. Photo via Wikimedia Commons

While the names of other camps have become synonymous with the Nazi regime, until relatively recently the stories of survivors and those who perished at Ravensbrück, and those who presided over their suffering, has remained little known. I ask Dr Saidel if this is because the camp was for women. “That’s one reason but there are other reasons. Ravensbrück was in what became in East Germany. People from the West really couldn’t go there. I was extremely fortunate to be able to visit in 1980; it was quite rare that that happened. There were 20,000 Soviet troops stationed there at that time. It was the Cold War and it got lost in that way too. You can say that there were other camps in East Germany that were for men and they were better known, which is true. The fact that Ravensbrück was a women’s camp definitely contributed to it being overlooked by historians.”
In the past few years, Ravensbrück and the role of women in the Third Reich have begun to receive long overdue attention, with authors and researchers building on the work commenced by Dr Saidel, Daniel Patrick Brown and others. As this new interest shows, although the stories of the women of Ravensbrück are considered history their lessons remain as urgent as ever.