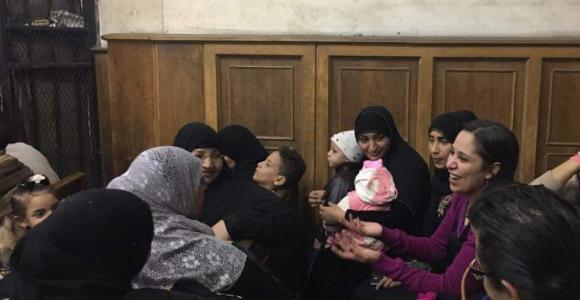 “Nazra for Feminist Studies” is a group that dreamed of having a role in change within society, and believed in the necessity of the presence of a better future for women in Egypt. Nazra contributed in the past 9 years to create and sustain the continuity of an Egyptian feminist movement. Since the registration of “Nazra” until this moment, women’s human rights and their issues were the compass of the team, so we kept raising issues of women’s human rights and their right to safety regardless of how controversial they are, and we contributed alongside other organizations and actors in placing the issue of sexual violence – and particularly rape – on the political agenda and raising it for societal dialogue.

At the end of 2012 and beginning of 2013, with the increase of violence against women in Tahrir Square and its vicinity that reached the extent of raping women with sharp objects, we and other feminist organizations played an important role in breaking the silence and organizational, societal and political complicity towards the violence women experience in the public sphere. And we did not think it was enough to provide psychological, legal and medical support to survivors, but we also contributed in posing this issue with diligence to the state, society and political actors via publishing the testimonies of survivors, writing position papers, conducting campaigns and pressuring for the recognition of these crimes.
The transparent raise of the issue of rape in Tahrir Square and its vicinity contributed to raising the issue of sexual violence against women in general, and linking these crimes with the violence women experience on a daily basis in both private and public spheres, raising the flag of the necessity to respond to survivors’ needs. And if it was not for the role that feminist organizations played in this period – including Nazra – the issue of rape and sexual violence would have been ignored, as a practice usually followed with women’s issues, except that these feminist organizations succeeded in imposing the importance of this issue until the nation’s President himself spoke about sexual violence in his speeches and apologized for these crimes committed against women on the day of his inauguration.
“Nazra” did not only raise the issue of sexual violence, as stemming from its belief in empowering women politically and that no democratic transition or positive change can be reached without the participation of women, “Nazra” worked on training and supporting a number of women cadres to help them undergo the different election struggles that Egypt witnessed after the revolution, to ensure women’s participation and raise their issues through available democratic channels in the Egyptian political sphere. And because we also believe that movements are built and sustained by the presence of young generations and new groups, “Nazra” supported young feminist initiatives that started blossoming in governorates after the January revolution. All that we conducted in the past years stemmed from our deep belief in women’s human rights and the important role of the feminist movement in empowering them.

And in the face of these efforts that we and other organizations exerted, the state insists on limiting the struggle of civil society in the issue of “receiving funds” via the asset freeze orders of human rights defenders and women human rights defenders and those of their organizations, and what the state views as an external conspiracy against it. Even though financial resources are an important factor for the presence and work of any organization and a guarantee for its sustainability, the work of civil society organizations is not strictly limited to receiving funds, but the belief in principles and ideas related to the rights of citizens and working for realizing them, and the attempts of these groups to positively affect their societies. In spite of the fact that the asset freeze of “Nazra” NGO will limit our work in an obvious manner, the team vows to continue what we started with all its energy and work tools guaranteed by the constitution and law. The future we dream of for women in Egypt is far from realized, we will continue to work for it, for a better life for Egyptian women, and for the sustainability of a strong and independent Egyptian feminist movement.