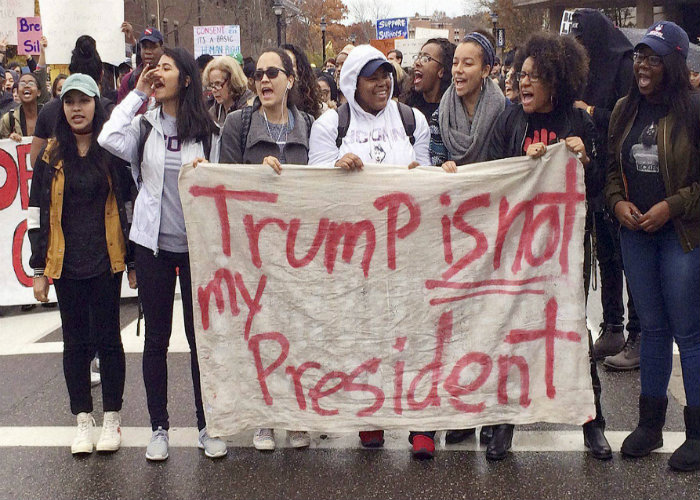 The feminist collective TO MOV joins the international protests and calls in front of the USA embassy in Athens, 21/1, 13 hours, Venizelos statute in Thessaloniki, 12 n. Many other movements and collective announced participation

The new president of USA, who takes office at 20 Janyary, has “promised” all kinds of reactionary reforms, and has placed extreme warmongers and conservatives in his ministerial council and the High Court.
Hundrends of thousands of citizens, in various movements, are protesting these days in the USA, to protect their democratic rights and to obstruct the realisation of the terrifying threats uttered by the new president, against all rights.

In Europe, in the whole world as also in Greece, we stand in solidarity to the feiminist and human rights movements of the USA. When the threat comes from a country that influences the planer, we feel the whole planet is threatened.

The movements in the USA “defend social justice and human rights concerning race, gender, nationality, confession, migration and health”. And they underline the right of women to control of their bodies, since in his first declarations the new president targeted against family planning, through funding cuts.
In the struggle concerning climate change, the new president states he will withdraw the signature of USA from the Paris Agreement, because he considers the climate change to be a myth…

Many feminist collectives and networks, together with human rights collectives and movements of antisystemic orientation are mobilising in Europe and other continents against a president who has clearly shown his misogynist feeling, antisemitism, racism, islamophobia and homophobia, the contempt of the environment.

Resisting the extreme right wing policies prepared by Trump does not signify the acceptance of the previous policies. We don’t choose a leader of the planet. We don’t forget the bloody wars against Iraq and Afghanistan, with millions of victims among the citizens, the interventions in the Balkans, the huge military expenditures, the reinforcement of NATO, the constant bombings of African countries mainly, with drones, Guantanamo lasting for 15 years. We don’t forget the policies that make the rich richer, the rich countries richer, and leads to redistribution of wealth against any kind of weaker or different. Unfortunately, according to the proclamations of the new president, these phenomena will multiply if the citizens of USA and of the world allow for it.

The movement against global Trumpism is decided to obstruct the even worse road announced by the new president.