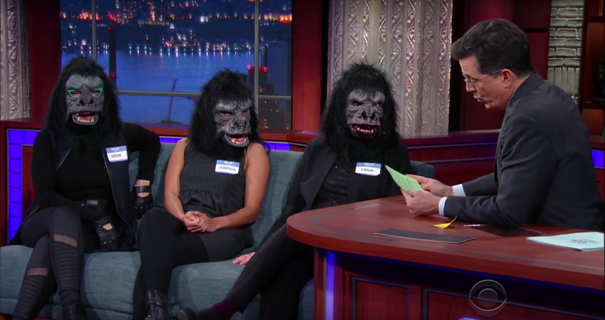 Gender inequality in the art world is still a thing, and it still needs to go away: that’s the gist of the Guerrilla Girls’ recent interview on The Late Show With Stephen Colbert. The anonymous feminist art collective, founded in New York City in 1985, appeared on the show last week in their trademark gorilla masks to make a solid case for including more women artists in major museums. “Art should look like the rest of our culture… you know, unless all the voices of our culture are being heard in the history of art, it’s not really a history of art–it’s a history of power,” a Guerrilla Girl using the alias Frida Kahlo says.

The six-minute clip offers a quick introduction to the Guerrilla Girls’ mission. They decry the lack of real progress made towards gender equality in the art world in the 30 years they’ve been working. They condemn the current state of museum funding — more often than not, it’s a handful of male billionaire art dealers and donors who call the shots when it comes to contemporary museum acquisitions.

While it’s not their most in-depth or out-there interview, this Late Show appearance did manage to spread the Guerrilla Girls’ feminist message to a mainstream cable audience — something of a first for a group that originally operated on the fringes of the art world.

Still, there are a few things — compiled from slightly more subversive interviews — that we wish the Guerrilla Girls had managed to tell this mainstream cable audience:

They’ve had moles in the offices of major museums. “Our first extended attack [on a museum] was a 1987 Clocktower show about the politics of the Whitney Biennial,” the Guerrilla Girls told artist Cindy Sherman in Interview Magazine in 2012. “We even had a deep throat in the development office smuggle out sensitive info about the trustees. The museum’s response: silence.” Since then, their attacks on museums and institutions have been far more effective: “After we made fun of the National Gallery of Art, they vowed to change their ways. Ditto the Tate Modern and MoMA. Even the venerable Venice Biennale has improved a bit since our giant 2005 installation about its discriminating history. Whenever our work appears at an institution like that, we get tons of emails from people telling us that our work showed them something they never knew about art and culture.”

They plan to bomb the world with estrogen. “We’ve been working on a weapon, an estrogen bomb,” Frida Kahlo said in a 2012 interview.  “If youSOURCE: Hyperallergic drop it, the men will drop their guns and start hugging each other. They’ll say, ‘Why don’t we clean this place up?’ In the end, we encourage people to send their extra estrogen pills to Karl Rove; he needs a little more estrogen.”

Some Guerrilla Girls may or may not wear their gorilla masks while having sex.