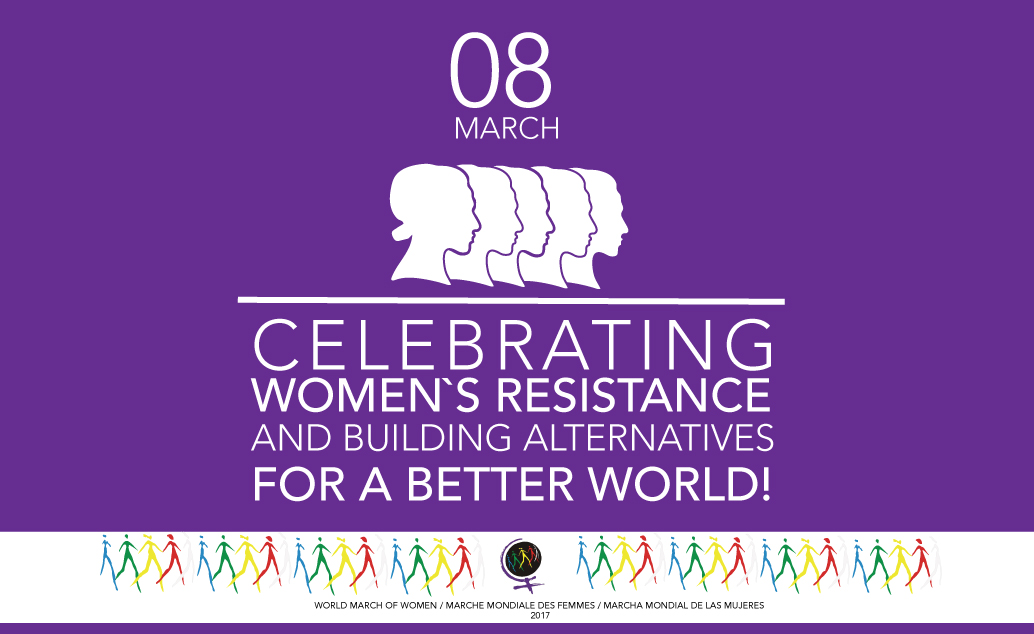 We women from the World March of Women unite our voices to honor the historic and vivid struggles of women and feminist movements around the world.

We denounce the global political context marked by the increasing governments’ takeover by rightists parties manifesting hate, racism, misogyny, intolerance and all forms of discrimination. We face the rise and radicalization of militarist violence used to control our territories – body, mind, land, waters, forests, knowledge and even our historic past, our present and our future in order to maintain patriarchy, neoliberal capitalism and neo-colonialism as dominant paradigms. Meanwhile, the development discourse falls empty where political elites are accumulating wealth shadowed by corruption, impunity and fragile institutions that are never accountable to the people.

Climate injustices are on the rise in every regions destroying livelihoods and causing deaths especially in poor communities. Nation states have been failing to advance their commitments on climate justice and keep delivering false solutions. We call the world to shame the President of United States of America who has gone backwards by denying the Climate Agenda.  Meanwhile, his discourse “America first” gives more power to American Corporations to go all over the world polluting, dispossessing local communities, exploiting human labor as they did centuries ago with slavery. As we all know, women in the south, migrant women, women of color, indigenous women and women from sexual minorities pay with their bodies and labor all the costs behind any Economic growth figure, behind any “greatness”.

In this context, women, either in the North or in the South are today facing the most harmful aggression of their rights, impacting in the increasing violence in forms of femicide, forced migration leading to women’s exploitation, traumas and deaths.

These are enough reasons for us to stand in solidarity with our sisters and all women in the struggle.

·      Around Africa, women resist to multiple forms of neo-colonial violence perpetrated by Transnational Corporations in extractives and agribusiness invading communities and destroying local livelihoods causing impoverishment. In those realities, women and girls face rape, forced marriages and early pregnancies, limiting their access to education denying them a life of dignity.

·      In the Arab world and Middle East there are women resisting fundamentalist groups planting terror in communities and exposing women to many forms of violence and brutality, including slavery. Women are taking action as self-determination and self-defense mechanisms.

·      In the Americas, Leftists are being replaced by extreme right governments who are destroying important gains of many decades, pushing back neoliberal agendas that serve capitalist interests. Women resist defending fundamental rights, and the rights of the nature and common goods, as a result they face criminalization of their struggle, mutilations and assassinations.

·      Asia historically suffers the effects of colonialism and neoliberalism. Currently, while poverty increases as a result of the intensification of territorial control by TNCs, protected by global neoliberal policies, women are much more exposed to labor exploitation, sexual violence and women’s trafficking.

·      In Europe, in different regions women are opposing themselves to the backlash in their rights to abortion imposed by increasing fundamentalist forces mainly radicals taking control of States’ decision making processes. Austerity measures and security are being utilized to justify the renascence of radical nationalism causing intolerance against immigrants and other minority people/groups.

As we celebrate the International Women’s day, we support the proposal to an International Women’s Strike, because we believe on the need to building and strengthening our International feminism movement as a force to women’s international solidarity.  We value the self-organization of women in their local, national and regional context of struggles. We come united as global women, with the same voice we raised in our 10th international meeting “women in resistance, building alternatives for a better world” because, as we said, our movement is our alternative. We believe that by joining efforts with other women’s movements that are active in this call, we will strengthen the struggle around issues of common concern and we will gain more hope!

However, we continue to put emphasis on the Global Actions we’ve planned during our 10th International Meeting, namely:

·       Meanwhile, we support calls for Actions organized at regional level to address issues of regional concern

WE ARE ON THE MARCH UNTIL ALL WOMEN ARE FREE!