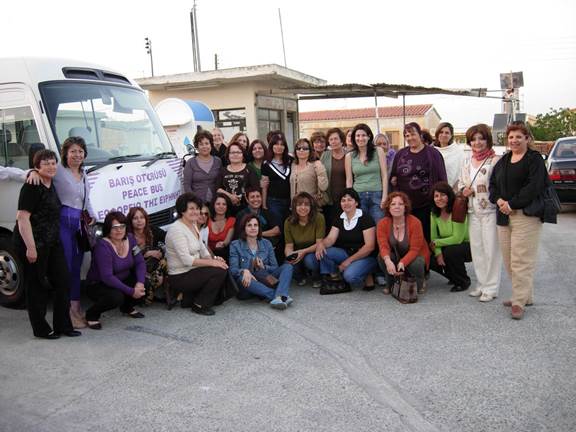 Hands Across the Divide, Founding Member

August 7, 2017 – With the breakdown of the Cyprus Peace negotiations in July of 2017, what is still apparent is that women and the gender lens are still missing from the official negotiating table as well as from the political discourse. While the UN, the SC and the EE continue to call for the increase of women’s participation at the decision-making levels in peace processes, and though we know that when women have been included in peace negotiations, their contribution and perspective have often ensured that peace accords address demands for gender equality in new constitutional, judicial and electoral structures, the current situation in Cyprus remains unchanged. An adequate understanding of the impact of the inclusion of the gender lens in such formal discussions on Cyprus, is also not clearly understood and continually ignored. Hence, #WhereAretheWomen of Cyprus.

Over the past 20 years various women’s organizations have taken on the responsibility of educating and advocating on the rights of both men and women. And though Cyprus currently has a comprehensive Strategic Action Plan for the Equality of Men and Women 2014-2017, put together under the auspices of the Gender Equality Commissioner of the Republic of Cyprus, this does not reflect the existence of frozen conflict in Cyprus.

The responsibility to educate the society on the inclusion of women in the peace process as well as trying to change the discourse from ‘ethnic and nation-based’ to ‘diverse and inclusive/human-based’ has been taken on by small groups of dedicated women; Hands Across the Divide, the first bicommunal women’s NGO on the island formed in 2001which had a vision of seeing gender equality integrated into the peace negotiations in Cyprus; the Gender Advisory Team formed in October 2009, which worked in collaboration with the UN Good Office Mission in Cyprus to design and work toward the implementation of UNSCR1325 (attending to questions of citizenship, property, governance, and the economy), and the Cyprus Women’s Lobby that lobbied for the implementation of UNSCR1325 and the inclusion of 50% of women on the peace negotiating teams. All have worked towards changing the public discourse and impacting the process of peace talks.

This, in addition to pressure from the European Women’s Lobby from Brussels resulted in the leaders of the 2 communities announcing on May 28 2015 as part of the confidence building measures that a Gender Equality Technical Committee would be appointed. While this certainly meant that a gender perspective was present in the official peace process and a commitment to addressing this problem was on the table in some way, there was no real way of assessing whether gender was now finally on the agenda of the peace process as media coverage was minimal at best, and there has been no contact between the Gender Equality Technical Committee and the local women’s groups because of a confidentiality agreement involved in the role.

Calling upon the opposing parties to adopt “a gender perspective” on peace negotiations and “gender mainstreaming” in all UN peacekeeping missions is meaningless unless women are able to gain confidence and skill sets (including the build-up of a gendered capacity in the civil society) that empower them politically and economically. There has never been a greater need for international actors such as UN Women and the EEAS Principal Advisor on Gender and on the implementation of the United Nation Security Council Resolution 1325 as their mandates are critical in leveraging the capacity of local CSOs efforts on the issue.

Consequently, Cyprus women seem to be far from implementing UNSCRes 1325 because there is a lack in real intention by the leadership to integrate women and the gender lens genuinely into the formal peace processes and the public discourse.