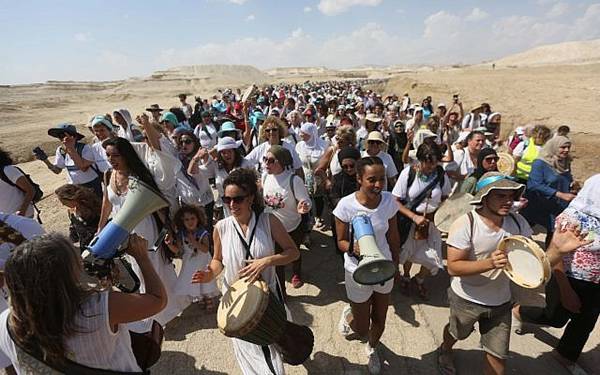 Women from the ‘Women Wage Peace’ movement and Palestinians take part in a march near the Jordan River, in the West Bank on October 8, 2017. (Flash90)

(Note from TO MOV: some of the concepts permeating this article, like naming terrorist, would not be of our choice)

Israeli and Palestinian activists were ending a two-week march Sunday through parts of Israel and the West Bank with a Jerusalem rally to demand a peace deal.

The Women Wage Peace movement organized the march, which began on September 24 and includes participants who have themselves been affected by violence in the Israeli-Palestinian conflict.

Several thousand activists joined the march over the two weeks

“We must come together to be able to reach the peace that we all want,” Michal Froman, who was stabbed by a Palestinian in January 2016 while pregnant with her fifth child, told AFP last week, saying she wants to “believe in peace.”

Huda Abuarquob, one of the organizers and a Palestinian from Hebron in the West Bank, said: “This march is not just another protest, but a way of saying that we want peace, and together we can obtain it.”

A 22-meter-high (70 feet) dress, billed as the world’s largest, was displayed for the first time near the Dead Sea in honor of the women as they walked past. 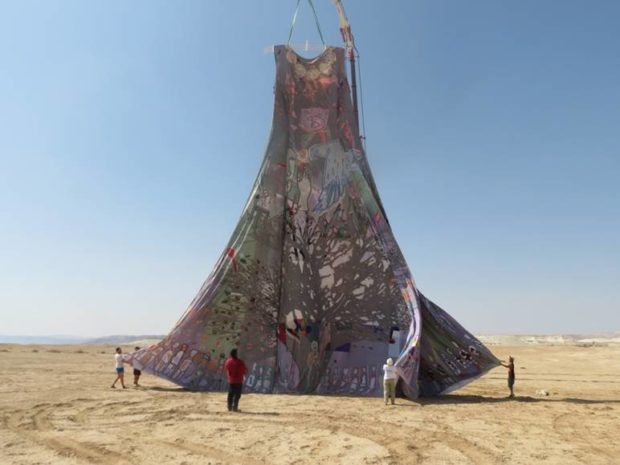 The dress, which has a circumference of 60 meters (200 feet), was created in 2007 by Israeli artist and activist Adi Yekutieli to highlight the plight of “chained” women whose husbands refuse them a Jewish bill of divorce. It has never been shown publicly before.

The march comes at a time when many analysts see little hope for an Israeli-Palestinian peace deal.

Palestinian Authority President Mahmoud Abbas is 82 and unpopular, while Israeli Prime Minister Benjamin Netanyahu leads what is seen as the most right-wing government in his country’s history.

In 2015, Women Wage Peace members fasted in relays over 50 days, the length of the 2014 war between Israel and the Hamas terror group in the Gaza Strip.

Sunday’s arrival in Jerusalem coincides with the week-long Jewish holiday of Sukkot, which commemorates the Jewish journey through the Sinai after their exodus from Egypt.

Earlier Sunday, thousands of Jews gathered at Jerusalem’s Western Wall for a priestly blessing held during the holiday each year.

These Palestinian and Israeli women demand only one thing: Peace.