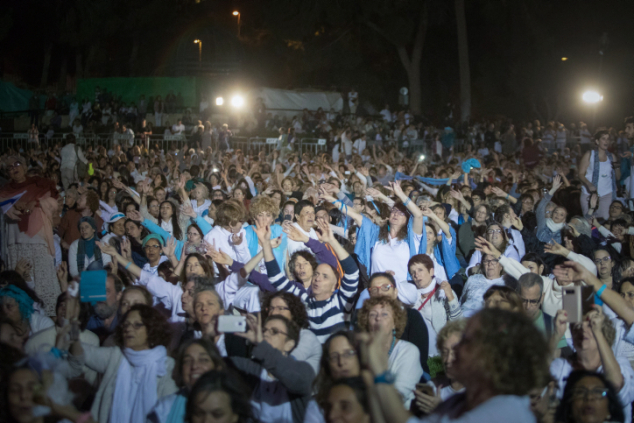 A recent rally organized by ‘Women Wage Peace’ may have looked momentous, yet it ignored 50 years of military occupation, all while recycling the same old tropes about the role of women in violent conflicts.

I arrived early and with many reservations to the rally organized by “Women Wage Peace” in Jerusalem’s Independence Park this past week. It was the culmination of a two-week “Journey to Peace,” in which thousands of Israeli and Palestinian women marched through Israel and the West Bank to demand a peaceful resolution to the conflict. I had been following the group since it was formed after the 2014 Gaza war. On the one hand, a mass movement of women in support of peace is a welcome change. On the other hand, what are they actually saying? And even more importantly: what are they not saying? How can it be that the word occupation is entirely absent from a group that aims to end the conflict?

I came early, deciding to sit in a cafe along the route of the march. After a few minutes, two women dressed in white and speaking in Arabic sat next to me. I asked if they were part of the march; they said yes. After a brief conversation, I asked one of the women, a Palestinian-Israeli from Jaffa, if she isn’t bothered that Women Wage Peace never even hints at the word “occupation.”

“This was the decision that was made,” she responded evasively. When I asked once more whether or not it bothers her, she said, “of course it bothers me. It bothers me as a woman, as a Palestinian, as an Israeli, but this is what they decided. That we must speak about the future, we’ve already spoken plenty about the past.” But the occupation is not the past, I insisted. It is very much the present. “You’re right, but what can we do? Keep sitting at home? We need to do something to change reality.”

Our conversation was cut off by the march, which suddenly grew close. We paid and hurried outside. The sight was enthralling: thousands of women — and men — dressed in all white, marching and singing songs of peace in central Jerusalem. This is, of course, not a common sight. There were so many people that passersby just gaped; the usual right-wing chants well known from other protests — generally far smaller, especially in Jerusalem – were hardly heard. As a Jerusalemite, it was strange and exciting to be part of it all.

Wombs in the service of peace

With utmost ease, an estimated 30,000 women — the vast majority of them Jewish — filed into the park, waiting for the rally to begin. After the crowd amassed, the rally began with a trilingual (English, Arabic, and Hebrew) rendition of Leonard Cohen’s classic, “Hallelujah,” led by Yael Deckelbaum and the Prayers of Mothers ensemble. Very quickly I realized that “mothers” was the key word here. Nearly every woman who spoke at the rally, aside from the younger ones, spoke about motherhood. Adi Altschuler, an educational entrepreneur, used the mantra “heart to heart, womb to womb,” which made me break into a nervous sweat in the Jerusalem cold. We live in a country where women’s wombs are deployed by the regime as an incubator for future soldiers (Altschuler, who gave birth to her first child recently, also spoke about being a mother to a future soldier), while on the other hand our wombs are deployed for the sake of speaking about our role as mothers who want peace. This as opposed to women who simply demand justice, for instance. Equating womanhood and motherhood was enraging, to put it mildly.

Another motto that was bandied about was kulan, all of the women. The movement, it turns out, includes all types of women — Jewish and Palestinian, religious and secular, Mizrahi and Ashkenazi, urbanites and the those who live far from economic centers, LGBTQs, right-wingers, left-wingers, centrists, new immigrants and veteran Israelis. All types of women, including a settler who, as she put it, lives in “beautiful and bleeding Samaria.” Yes, even she wants peace. But how does she see us achieving that peace? “When tens of thousands of women are able to talk about the difficult topics our leadership won’t be able to ignore us.” But what are those difficult topics we must talk about? Perhaps the defiant and growing presence of settlements, like the one she lives in, and which prevent any chance of establishing a Palestinian state? No. So perhaps the occupation and the checkpoints she passes through every day on her way home? Human rights violations? War crimes? No. A West Bank settler can so easily stand on stage and speak about the need “to talk about the difficult things,” because she knows they won’t actually be talked about. Otherwise, she might not be able to take part in the movement from the get go.

In fact, the movement’s demands are so unclear that even Netanyahu could join if he were so inclined. Its demands can be summed up as such: peace negotiations that include women. That’s it. But what will these women say when they sit around the negotiating table? What are their demands? Their red lines? It’s a mystery. Even the Palestinian speaker — the only one who came from the occupied territories, from Hebron, a city that lives under apartheid — did not mention the word occupation even once. She did not even speak in Arabic, for God’s sake, but rather in English. Not a word about the checkpoints or the hardship she endured just to get a permit form the Israeli army to enter Israel. Occupation? Forget it. We are talking about the conflict — a much nicer, more symmetrical word than occupation. Almost ironically, the one time the word occupation was used onstage was by the only man who spoke, former MK Shakib Shnaan, whose son Kamil was killed in the bloody attack on the Temple Mount three months ago. Perhaps the fact that he is a man allows him to speak this way. Us women need to speak about the womb, wear white, and hope for peace. How do we achieve peace? Ask the men.

I write these words with a great deal of sadness. In the political reality of the last few decades, there is nothing trivial about the fact that tens of thousands of women are demanding to change that reality and are willing to march down the streets of every town and city in order to build their movement. That this is a women’s initiative gives it even greater potential. And yes, there is such a thing as women-led politics and it can be revolutionary and powerful — a politics that first and foremost challenges existing hierarchies and social structures.

The women-led politics I saw in Jerusalem was the complete opposite of that, however. It was the kind that only strengthens those existing power structures. It was a politics in which being a woman means wearing white, singing and dancing. It means being a mother and a womb, to sit at home and take care of our soldier sons. It means gently asking men to make peace already. Instead of a women’s revolution, we got women who are demanding change but cannot for the life of them decide what kind of change they want to see. Women who only entrench the view that politics is a dirty word that women shouldn’t bother with — that it’s reserved for men alone.

There is something simplistic, even childish, about speaking of “negotiations” and demanding a “peace agreement” a quarter century after the failure of the Oslo Accords. Negotiations? On the contrary: Israel would love to enter into another endless round of talks that will stave off international pressure and allow it to continue dispossessing, just like all the previous rounds of negotiations. These women seek to jump into this vacuum, filling it with lots of emotional words and a desperate attempt to create some semblance of symmetry between Israelis and Palestinians.

As thousands of women sang songs of peace and sisterhood in Jerusalem on Sunday, a rocket was fired from Gaza at Israel, to which Israel responded by attacking the Strip. Can we even begin to grapple with this reality without speaking about the siege? Without using the word occupation?

Yes, speaking about the occupation is not popular, and it may even drastically decrease the number of participants in the next march. But perhaps we should listen to the words of the settler woman: until we are able to speak about the difficult things, it is doubtful whether we can change anything in the real world. Even if we all wear white and talk about our wombs — in Hebrew, Arabic, and English.

This post was first published in Hebrew on Local Call. Read it here.