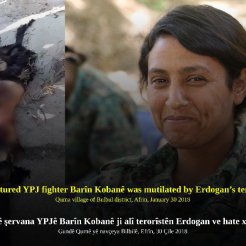 Thousands of Kurds gathered in Syria’s Afrin Saturday to mourn fighters and civilians killed in a blistering Turkish assault on the region — including female combattant Barin Kobani.

But there was no casket for the young woman fighter. Her mutilated body appeared in a shocking video published earlier this week, prompting accusations by her family and Kurdish officials that she was “defiled” by Turkish-backed rebels.

Family members have yet to retrieve her corpse from those rebels and could not bury her alongside 17 other fighters and civilians during the mass funeral on Saturday.

“They all have their burials, except my daughter Barin,” said her shell-shocked mother, surrounded by wailing mourners carrying posters of the woman in her early 20s.

“They tore up her body. She doesn’t get a funeral. Oh, my daughter.” 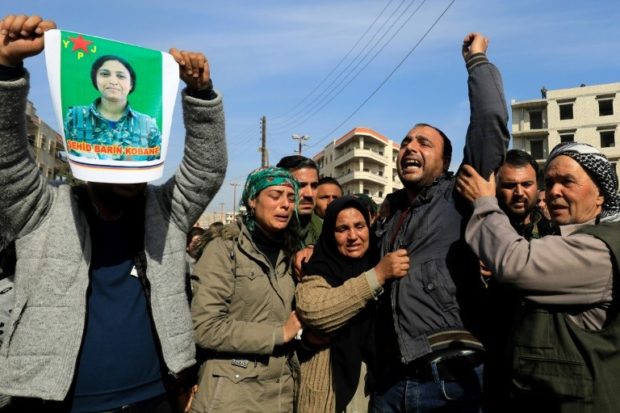 A picture taken on February 3, 2018, in the town of Afrin shows the mother (3rd-L), sister (2nd-L) and brother (C) of the late YPJ fighter Barin Kobani, chanting slogans during a mourning ceremony in her honor

Footage published this week by the Syrian Observatory for Human Rights showed the lifeless body of a woman lying on the ground, surrounded by a dozen men, some armed.

The woman’s sweater is pulled above her head and trousers dragged low, revealing a large blackened abrasion from her chest down to her bellybutton. One man is seen stepping on her left breast.

The lifeless body was identified by Kurdish officials and locals who knew Kobani.
The Britain-based Observatory said it received the video from a Syrian rebel fighting as part of Turkey’s two-week assault against the Kurdish People’s Protection Units (YPG), which control Afrin.

Kobani, whose real name is Amina Omar, took up arms in 2014 to battle the Islamic State group as it swept through parts of Syria and neighbouring Iraq.

She joined the Women’s Protection Units (YPJ), the all-female arm of the YPG, and fought IS in the border town of Kobane in 2015 and in the jihadists’ self-styled capital Raqa last year.

The YPJ on Friday announced the death of four of its fighters — including Kobani — and accused Turkey-backed factions of “mutilating them.” 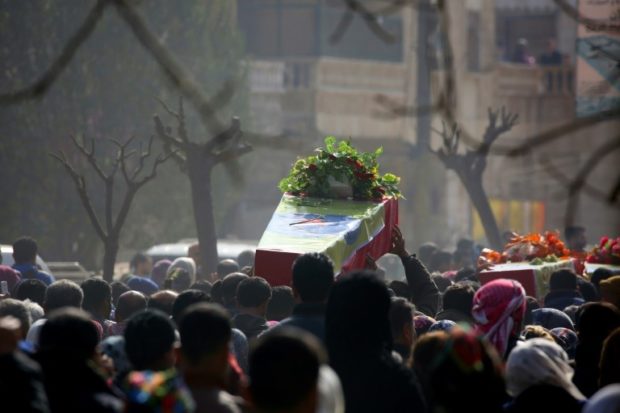 This and the next photo: Syrian Kurds take part in a funeral on February 3, 2018 for Kurdish People’s Protection Units (YPG) militia fighters killed in a Turkish assault on the Afrin region

YPJ spokeswoman Nesrin Abdullah told AFP that Kobani and the other three female fighters were caught up in clashes with the pro-Ankara rebels, refused to withdraw, and “fought until death.”

Sweat poured down his face and mixed with his tears as he sobbed next to his other sister, brother, and their elderly, stoic mother.

He told AFP that his sister had detonated explosives she was carrying because she did not want to be taken hostage.

“They defiled her dead body brutally, unnaturally. They put her on their media to show their masculinity,”said Omar.

“She was a saint,” he said, before his face turned a yellowish colour and he collapsed.

Men and women of all ages paid their respects to the Kobani family at the funeral, telling her mother that Barin had become a symbol.

“She’s not just your daughter, she’s our daughter too,” one mourner said. 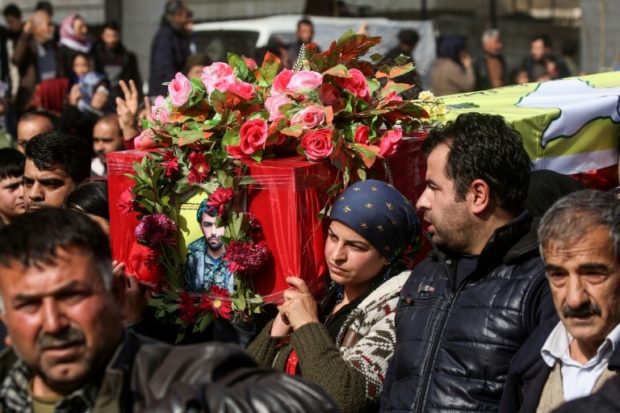 Turkey, which has blacklisted the YPG as a “terrorist” group, launched its offensive on Afrin on January 20.

It has bombed and battled Kurdish fighters in northern Syria multiple times in recent years, as have rebel factions allied with Ankara.

Turkey has provided political and military support to Syria’s fractious opposition since the uprising began in 2011.

The video of Kobani’s body sparked outrage in the Kurdish community and on social media, prompting calls for an investigation.

Syria’s exiled opposition government, which is based in Turkey and oversees an array of rebel factions, said it had begun investigating the incident.

“We have formed a committee to… determine the accuracy of allegations of mutilation of the fighter’s body by the national army,” it said in a statement.

And the Istanbul-based National Coalition opposition grouping condemned the actions in the video as “criminal acts.”