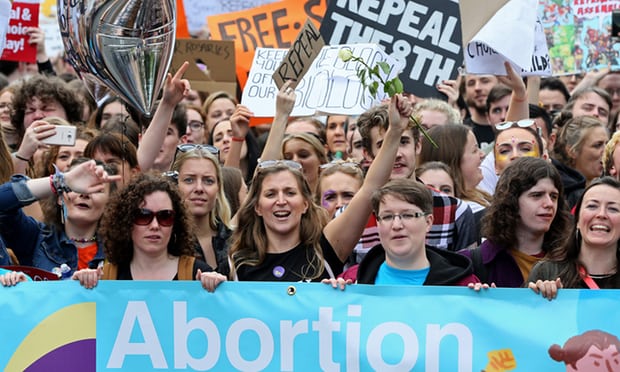 Photo: Rally for abortion rights in Dublin last year calling for the repeal of the eighth amendment of the Irish constitution. Photograph: Paul Faith/AFP/Getty Images

29 Jan 2018 – The Irish government has confirmed that it will hold a referendum on reform of the country’s strict anti-abortion laws by the end of May. The cabinet agreed to give voters in the republic the chance to repeal the eighth amendment to the country’s constitution on Monday.

After a four-hour meeting, the Fine Gael-led minority coalition also decided to ask the electorate to endorse enabling powers to allow the Dáil (parliament) to draw up a new law that would eventually permit abortions in Irish hospitals up to 12 weeks into pregnancy.

Speaking after the meeting, the Taoiseach, Leo Varadkar, said: “We have abortion in Ireland, but it is unsafe, unregulated and unlawful, and in my opinion we cannot export our problems and import our solutions.”

His cabinet agreed to establish a referendum commission which will bring in opposition parties to help frame the exact wording of the national plebiscite.

Varadkar’s deputy prime minister and foreign minister, Simon Coveney, emphasised that the government was united on the issue. In a statement, he said: “The status quo of how women are treated in crisis pregnancy cannot remain. I am united with my cabinet colleagues in agreeing to repeal the eighth amendment and allow enabling legislation.

“While there are differing viewpoints on the content of that legislation, particularly on 12 weeks’ access unrestricted, that is a matter for the Oireachtas [legislature] to now debate. My views are clear on that and I expressed them at cabinet.”

The eighth amendment was added to the republic’s constitution following a referendum in 1983. It recognises the equal rights to life of a foetus and the mother during pregnancy. Pro-choice campaigners say the amendment creates a “chill factor” in the health system preventing medical teams from carrying out abortions even in cases where a woman’s life may be at risk. They say physicians fear they could be prosecuted and sent to prison if they carry out terminations even in extreme cases such as when women are suicidal or become pregnant through sexual violence.

Before the meeting, the health minister, Simon Harris, described today as a “very key and significant day” in the country’s history. He said it was his preference to hold the vote in May. “I will ask government to agree to the approach to take with the wording of the referendum and obviously the government will hear from the attorney general.”

Confirming that in the event of a yes vote, the Irish parliament would be granted powers to draw up laws allowing for abortions up to 12 weeks, Harris added: “I will also ask permission to go ahead with the draft legislation we would put in place should the people of Ireland vote yes, and I will be asking government to come an agreed approach to that legislation.”

Varadkar’s own party is split over arguably the most contentious issue in Irish politics. While 18 Fine Gael TDs are openly in favour of a yes vote for abortion reform, four TDs have come out to oppose change, with 28 other Dáil deputies undeclared.

The main opposition party in the state, Fianna Fáil, is also split on the issue, although its leader, Micheál Martin, has come in favour of a yes vote.

Pro-choice campaign group the Coalition to Repeal the Eighth Amendment said they had hoped the announcement would include holding the referendum in May. Veteran abortion rights campaigner Ailbhe Smyth, the Coalition’s chairperson, said May was the preferred date as Ireland’s students were still in the country at that time.

“Come June and the broad mass of Irish students are on their way to other parts of the world such as the United States to work over the summer to pay for their studies. We have told the government it makes sense to hold the referendum in May as the students will still be in Ireland. And it’s only fair to have it then because this issue affects them more than most.

“It is their generation that will feel the impact of any change in the constitution and the subsequent legislation that will reform Ireland’s abortion laws. The Union of Students of Ireland, along with ourselves, have been lobbying for a May vote and we hope – we think – the government has listened,” Smyth said.