On the 8th of March2018, International Women’s Day, we from the World March of Women, diverse women from all peoples, races and ages, come together once again to reaffirm that we will keep marching until we are all free from all the oppression from the patriarchal, capitalist and colonial system; we will continue to use our feminism as a way of life, and the streets as the space to amplify our demands.

We denounce and resist the political worldwide context marked by the growing economic, social, political, climatic and ideological crises, in short, we denounce the total war environment where we, women, are the most affected!

We denounce economic and nationalist fables as a way of depriving women of their fundamental rights and freedoms and the consequent boycott of women’s and peoples’ autonomy. We reject all the policies from right wing governments that, increasingly radical, express hate, racism, misogyny, intolerance and other forms of discrimination. We will stand firm and fight against the growing criminalization of social movements. The struggle for our rights and freedoms is a fair demand so WE ARE NOT CRIMINALS! We will continue to take the streets and act in solidarity with our sisters that were murdered, persecuted and deprived of their freedom and political action.

We denounce and face the growing militarization worldwide as a strategy to control peoples’ life. Militarization ensures neocolonialism, the new looting and the appropriation from capital over natural resources and the maintenance of the arms industry’s enrichment in the face of the crisis, apart from the permanent state of war in the Middle East and Africa. We are concerned about the signs from militarized powers of the north that threaten the return to the cold war era and the permanent interference in the global south countries trying to impose the model of neoliberal nordic democracy as the goal to be achieved.

We denounce the free trade agreements, that increasingly impoverish the peoples from the global south. The appropriation, privatization and commodification of knowledge production, and other resources as the land, water, health, education and other common goods deepen the exploitation of impoverished people’s work, diminishes the opportunities of future generations, perpetuating the poverty cycle. The extractive industry and the agribusiness continue to degrade our health and our living conditions while political elites accumulate a wealth based on corruption and impunity, and build a state that serves the interests of transnational corporations. We reaffirm that we will continue to put our bodies on the streets to fight this situation as law institutions are increasingly weakened by the power of capital and do not function as they should. The market forces weakened the welfare state and the citizen’s rights. 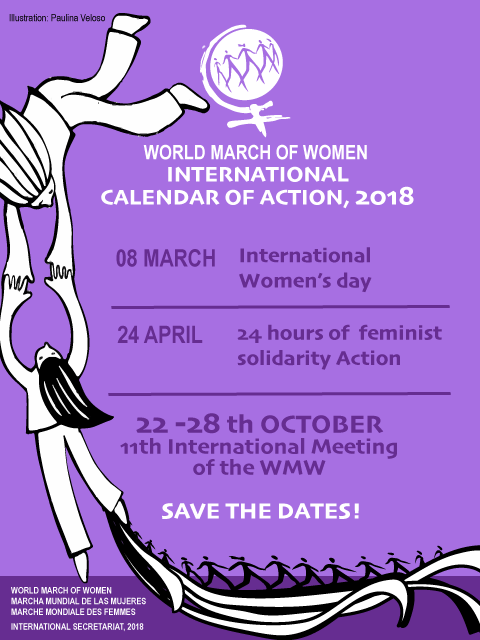 We denounce the destruction of the planet by the institutionalization of a Western universalism and the unbridled pursuit of profit. The cartel formed by the unethical multinational corporations is destroying the mother earth that sustains human life. The climate agreements have created false solutions based on a market-led language that has proven to be empty and perpetuating violence against nature! We, from the World March of Women, women from the farms and the cities, defend the Earth were we came from, that we are part of, that sustain us and where we will return; the water, the land and forests in our territories as we believe in ways of living that interact in a sustainable way with the natural resources.

We denounce a market that exploits and precarizes the working conditions of women through long hours of work, low wages and the exposition to several risks. We denounce the precariousness of domestic and care work. The work that guarantees the maintenance of the human life, that nourishes, harmonize, teach, protects. The same work that is invisible and devalued! We question the sexual division of labour that overvalues the work socially designed for men based on the denial of the value of work attributed to women. How can the world devalue the work involved in the most elementary tasks for human existence as cooking that feed us, or cleaning the place we call home? The work carried out by women is the basis that maintains human life and therefore an important source of economic contribution. We demand the recognition of the value of domestic work as economic contributions go beyond what can be monetized.

We denounce the aid industry and developmental programs, particularly the ones that focus on gender issues, as promoting neoliberal and imperialist agendas, perpetuating the discrimination, racialisation and exploitation of women in the global south.

We denounce, and will continue to do so, all forms of violence, not forgetting the sexist violence that we face daily in public and private spaces. We say as loud as we can ENOUGH! Stop the rapes, forced marriages and femicides that not only happen in African and Asian countries, but are present in the lives of all women from all the classes across the world. Our bodies and our lives belong to us and we will not negotiate that right.

We emphasise, support and participate in all the initiatives to end the silence, as the recent movements of denounce and occupation of the public space: Women’s March, Time´s up, #metoo, Ni una menos!, Vivas nos queremos! and the international women’s strike, as initiatives that add up to the permanent and inevitable struggles we have been fighting against the oppression of the patriarchal, capitalist and colonialist system.

We emphasize the struggles and resistances of the women that use the local as a space to build new narratives and to rewrite the history of marginalized populations, emphasizing the diversity and multiculturality of peoples, solidarity as a strategy of subversion against the current system and as a strategy of humanization contributing towards the transformation of societies, making them more just and equal.

It is because of this and much more that we, women from the World March of Women, as a movement of permanent action, will march on the 8th of March.

We will be in action around the world during the 24 hours of the 24th of April 2018 to reaffirm that “Rana Plaza is everywhere”; we will denounce the textile industry, transnational corporations and all kinds of exploitation of women’s labour.

We will continue to march towards the XI International Meeting where from the 22nd to the 28th of October in Basque Country we will collectively build utopias and alternatives towards the world of justice, freedom and peace that we march for!

We will continue to transform our pain in strength!

We will continue to believe in solidarity and collective work!

We will keep marching, Women… always!

and check out the new blog: marchamundialblog.wordpress.com