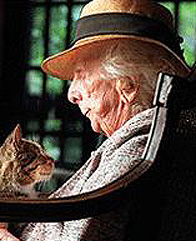 These Florida shooting victims are activists, just like the woman their school is named after

Before Wednesday, the name Marjory Stoneman Douglas — whose namesake school was the scene of a horrific school shooting on Wednesday — stood for environmentalism and standing up for what you believe.

It’s a legacy that, by most accounts, appears intact still, now that students at Marjory Stoneman Douglas High school are using the killing of their classmates as a vehicle for social change.

On Tuesday, about 100 Stoneman Douglas students set off for Tallahassee, the state’s capital, to meet with state lawmakers on Wednesday. Meanwhile, students from across the U.S. are planning walk-outs in protest of gun violence. And on March 24, a nationwide March for Our Lives demonstration is planned in Washington, D.C., and other cities.

The students find themselves activists fighting for a cause they believe in, very much like the woman whose name adorns their school.

Douglas joined the fight for women’s suffrage at Wellesley College in the early 1900s, an interest that later would serve her writing career.

She joined her father’s paper, which would later become the Miami Herald, in 1915, notes her bio at the Florida Department of State. It was there she built her reputation as a writer. In her column, “The Galley,” the bio states, she expounded on civil rights, environmentalism and women’s rights. 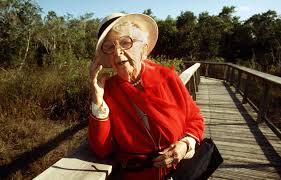 “I’d like to hear less talk about men and women and more talk about citizens,” she once said.

But it was her work to protect the Everglades from a growing Florida population that has remained her legacy. Her 1947 book The Everglades: River of Grass, remains an environmental classic, notes the Florida Department of State. She would later speak out against projects and positions slated to affect the Everglades’ ecosystem, earning her the moniker “the woman who saved the Everglades.”

She lived for years at her Coconut Grove, Fla., home, which is now maintained and owned by the state of Florida. The Parkland high school isn’t the only part of Florida boasting her name. A wilderness area in Everglades is named after her and the state’s Department of Environmental Protection is housed in the Marjory Stoneman Douglas Building in Tallahassee.