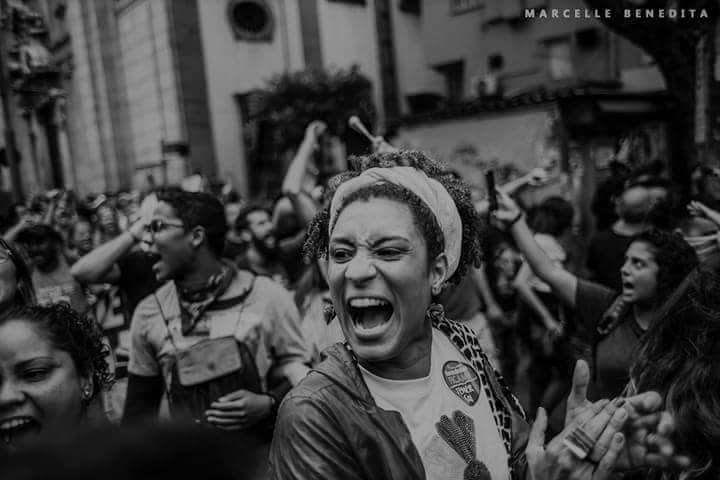 For our dead, not a minute of silence, but rather a whole life of struggle!

The World March of Women expresses its sadness and deep indignation at the murder of Marielle Franco, a feminist militant and city councillor of PSOL – Partido Socialismo e Liberdade in the city of Rio de Janeiro, Brazil. She was shot dead inside her car on Wednesday, March 14. In this moment of pain, we demand that the crime be investigated to ensure that her murder does not go unpunished. We express our solidarity with our PSOL comrades and Marielle’s family and friends.

Marielle, a black woman from the “da Maré” favela, was a militant of extreme importance to the feminist movement in the state of Rio de Janeiro. She fought for the construction of public policies for women in the city with an emphasis on confronting violence and defending women’s sexual and reproductive rights. She was recently appointed rapporteur of the City Council committee responsible for monitoring the military intervention in Rio de Janeiro.

There are strong indications that the Marielle’s murder was a political execution motivated by the serious denunciations that she had been making about the barbaric actions of the Military Police in the favelas of Rio de Janeiro and, more recently, in the Acari favela on Sunday, March 11.

We join our voice to those who denounce Marielle’s assassination as the first political execution carried out as part of the military intervention in Rio de Janeiro. It is a criminal act that seeks to silence us. We denounce that Brazil is under a state of exception in which fascist forces are acting without any limits and advancing in our society.

Marielle’s execution is an attempt to intimidate all those who struggle against state violence and inequality. This violence was also visible on the same day in the violent repression of public teachers in São Paulo who voiced their opposition to the bill aiming to reduce civil servants’ salaries to compensate for the supposed social security deficit in the city.

We will continue to strengthen the struggle expressed in the mass actions held on March 8th to demand democracy for the life of women. We raise our voice to say that they will not stop us! We will not stop building a fair and egalitarian society for women and for all Brazilian people.

The WMW around the world will continue supporting the demands for an investigation of the crime and pressuring the authorities responsible for this investigation.

We will be on the march until all women are free!