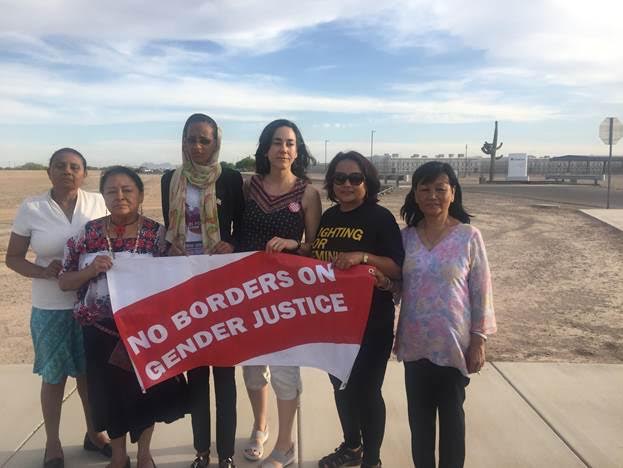 A delegation of Indigenous women climate defenders from Cameroon, Guatemala, Kenya, Nepal and Nicaragua spoke out from in front of Eloy detention center in Florence, Arizona to demand human rights for Indigenous Peoples and for others impacted by border militarization.

The women, whose own lands and ways of life are under threat by climate change, have come together as part of a four-day delegation organized by MADRE and the US Human Rights Network (USHRN) to learn from and share solutions with advocates in Arizona.

They express concern that instead of taking necessary steps to eliminate carbon emissions, the US has prioritized border militarization in response to climate change-induced displacement and is committing human rights violations against migrants and asylum seekers. “We see billions going to defense and border militarization from a government that imprisons and deports migrants and asylum seekers, many of whom are migrating partly as a result of the devastating impacts of climate change,” said Otilia Lux de Coti, a Maya Quiche woman, Indigenous leader and MADRE Guatemala Program Advisor.

Members of the delegation have witnessed direct impacts of extractive industries and climate change, including displacement, migration, and increased vulnerabilities to gender violence in their frontline communities. As women climate defenders, they work to advance sustainable local environmental solutions to adapt to climate change while repairing the social fabric in communities affected by violence and poverty. They discussed these solutions on Monday with members of Arizona’s Indigenous People’s Caucus, comprised of Indigenous members of Arizona’s State House of Representatives and Senate.

The Indigenous women’s delegation arrived in Arizona via New York, where they took part in the United Nations Permanent Forum on Indigenous Issues, calling for greater opportunities for Indigenous women to meaningfully participate in decision-making processes impacting their land rights. “We Indigenous women are creating local solutions while fighting global climate change, and it is time that we have a voice at policy-making tables,” said Lucy Mulenkei, Executive Director of the Indigenous Information Network and a Maasai woman from Kenya.

The delegation met with Indigenous and migrant human rights and climate justice activists throughout Arizona, including members of the Tohono O’odham community, whose land is bisected by the US-Mexico border and marked by US Customs and Border Patrol checkpoints. “We don’t need walls that divide people and scar Indigenous territory. We’re here with MADRE and the USHRN to declare: we need to unite as Indigenous women and allies globally to stand up for rights and protect our planet,” said Leduvina Guill Zamora, a Miskito women’s human rights defender with the organization Wangki Tangni in Nicaragua.