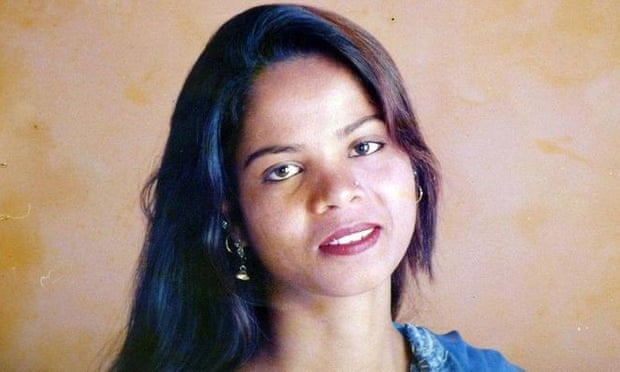 Aasia Noreen, known as Aasia Bibi, is a Christian farmworker who was convicted of blasphemy and sentenced to death in 2010. Despite being acquitted of all charges by the Supreme Court, the Pakistani government gave in to demands by a violent mob, stopping her from leaving the country and having the Supreme Court review its ruling.

URGENT ACTION
CHRISTIAN WOMAN ACCUSED OF BLASPHEMY AT RISK
Aasia Noreen, known as Aasia Bibi, is a Christian farmworker who was convicted of blasphemy and sentenced to death in 2010. Despite being acquitted of all charges by the Supreme Court, the Pakistani government gave in to demands by a violent mob, stopping her from leaving the country and having the Supreme Court review its ruling.

Aasia Bibi, a 54-year-old, who has a family of five children, has spent the past eight years on death row while waiting for her appeal to work its way through the Pakistani court system. Sentenced to death for blasphemy in November 2010, Aasia Bibi was accused of insulting the Prophet Muhammad after offering her fellow farm worker a glass of water who responded by saying that it was “unclean” because Aasia Bibi was a Christian. Pakistani Christians in Punjab, where Aasia Bibi is from, are subject to caste discrimination as well as religious discrimination owing to their background as former Dalits who were often considered “untouchable”.

Three years after accepting Aasia Bibi’s appeal for consideration, the Pakistan Supreme Court acquitted her of all charges on 31 October 2018, citing insufficient evidence. After the ruling was announced, violent protests erupted in major cities in Pakistan, with violent mobs blocking roads and setting vehicles on fire. Prime Minister Imran Khan appeared on television to uphold the verdict and denounce the violence. But after two more days of protests, his
government backed down.

A delegation from the government entered negotiations with leaders from the Tehreek-e-Labbayk, who led the protests, and agreed that Aasia Bibi’s name will be added to the Exit Control List and that the Supreme Court will hear a “review petition” that seeks to overturn her acquittal. With no date for the review yet having been set, Aasia Bibi remains in prison.

The life of Aasia Bibi, as well as that of her family, are in grave danger as they continue to face threats. Aasia Bibi has faced attacks in prison from fellow inmates before the Supreme Court verdict. If the Supreme Court ruling is reviewed and reversed, she could face execution. And if she is released, there will be a threat to her life from the mobs who will try and prevent her from leaving the country.

Please write immediately in English, Urdu or in your own language calling on the Pakistani authorities to:
• Uphold the Supreme Court’s acquittal of Aasia Bibi and facilitate her immediate release and her safe travel with her family to another country where she may wish to seek asylum;
• Protect the senior judiciary and other officials against threats and violence from protesters;
• Repeal the blasphemy laws as soon as possible, as well as other laws that discriminate against religious minorities and put their lives in danger.

URGENT ACTION
CHRISTIAN WOMAN ACCUSED OF BLASPHEMY AT RISK
ADDITIONAL INFORMATION
After Aasia Bibi was sentenced to death in November 2010, two prominent politicians took up her cause, calling on the then
Pakistani President, Asif Ali Zardari, to pardon her. Salmaan Taseer, the Governor of Punjab, was assassinated by his own bodyguard in January 2011. Two months later, Shahbaz Bhatti, then the only Christian member of the cabinet, was shot dead outside his mother’s home in Islamabad.

Pakistan’s blasphemy laws are notoriously vague and carry heavy penalties. On the basis of little or no evidence, the accused can face a death sentence. They violate Pakistan’s obligations to respect human rights and pave the way for other abuses, including death threats and killings. Judges are hesitant to acquit people, lest they become the next target. Defence lawyers have been killed in court. Witnesses and families of victims have had to go into hiding. And the authorities, instead of standing firm in defending human rights, have stood back and given ground to those using violence [and threats?] to suppress them.

Once an accusation of blasphemy is made, the police can arrest the accused, without even checking to see if the charges make sense. Bowing to public pressure from angry crowds, including religious clerics and their supporters, they frequently pass cases on to prosecutors without scrutinising the evidence. And once someone is charged, they can be denied bail and face lengthy and unfair trials.

The threat of violence follows many people accused of blasphemy, with groups or individuals taking the law into their own hands to threaten or kill the accused and other people associated with them, including their lawyers, members of their families, and members of their own community.

A pall of fear also hangs over those working in Pakistan’s criminal justice system, preventing lawyers, police, prosecutors and judges from carrying out their jobs effectively, impartially, and free of fear.

In a report published in 2016 (https://www.amnesty.org/en/documents/ asa33/5136/2016/en/) Amnesty International showed how the blasphemy laws enable abuse and violate Pakistan’s international legal obligations to respect and protect human rights, including freedom of religion or belief and of opinion and expression. It also showed how the laws have been used to target some of the most vulnerable people in society, including members of religious minorities.

Pakistan’s Supreme Court has acknowledged that “the majority of blasphemy cases are based on false accusations” and are driven by ulterior motives. Amnesty International has found that such motives are rarely scrutinized by the authorities and can vary, from professional rivalry, to personal or religious disputes, to seeking economic gain.

Amnesty International calls for the blasphemy laws to be repealed and for any new legislation to fully comply with international law and standards.